PEOPLE AGAINST O’HARA, THE

Spencer Tracy plays widowed civil suit lawyer James P. Curtayne, who was a former prosecutor and a top-notch criminal defense lawyer but left that high-pressured branch of law because of his drinking problem. The recovering alcoholic is now being nursed by his twentysomething daughter Ginny (Diana Lynn), who has put off her marriage plans to nice guy Jeff just to make sure dad keeps on the wagon.

When the parents of Johnny O’Hara plead with Curtayne to take their son’s case, he reluctantly decides to after finding out that his old acquaintances from his childhood neighborhood are too poor to retain a quality lawyer he recommends. Johnny (James Arness) is accused of fatally shooting his ex-con fish market boss, Mr. Sheffield, on the steps of his house. The young man is held on murder charges because Frankie Korvac (William Campbell), a supposed pal of Johnny’s, testifies after his prints are discovered on the abandoned getaway car, that he drove the getaway car and Johnny did the shooting. Korvac tells the police they planned to snatch Mr Sheffield’s suitcase which was believed to contain a gold bar.

Curtayne believes Johnny is innocent, but runs into trouble when Johnny’s alibi of being at work is not corroborated by the watchman. The ambitious but straight-shooting DA, Louis Barra (John Hodiak), comes up with a mysterious witness, Sven Norson (Jay C. Flippen), a merchant seaman from a foreign country, who bears false witness. His testimony comes after Barra discovered that Curtayne tried to bribe him for $500 to change his testimony. Barra refuses to rat out his former colleague, but Curtayne is driven to drink again and to feel sorry that he did an inadequate job for his innocent client who was found guilty.

Curtayne still has many friends on the police force and one of them, Homicide Detective Ricks (Pat O’Brien), tips him off that Johnny was out that night with his girlfriend Catrina Lanzetta, who is married to notorious gangster Knuckles Lanzetta. But Johnny refuses to use her as an alibi, fearing for her life if hubby discovered their affair.

When it’s discovered that the real value of the suitcase is over hidden narcotics, Curtayne risks his life to entrap the real murderer by planting a microphone on himself and baiting the assailant to come forward and reveal his identity. Curtayne redeems his unethical behavior by giving his life to get his client free.

It’s not the usual strong role Spencer Tracy is noted for, but he acquits himself well as the vulnerable lawyer who is indecisive and plagued with a battle against the bottle. Tracy agreed to the part only if his longtime pal Pat O’Brien was given a featured part. O’Brien was passe to the studio and was being passed over for roles in A films. 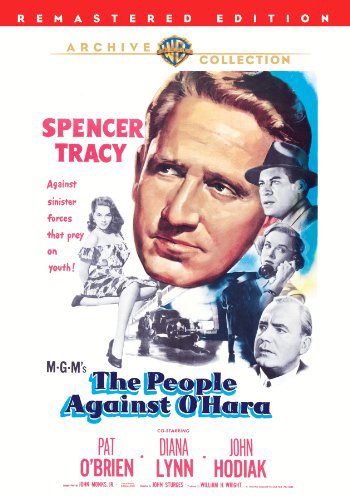