It opens with the beautiful newlywed Séverine Serizy (Catherine Deneuve) dreaming of being whipped and debauched in the woods by the carriage coachmen at her husband’s request because she was naughty. Séverine is a frigid and bored housewife married to a handsome, considerate, devoted and kind-hearted French surgeon named Pierre (Jean Sorel). Learning from one of her bourgeois friends (Macha Meril) that someone they know from their same upper-class circles works in a brothel, leads Séverine to work in the high-class whorehouse run by Madame Anais (Geneviève Page) in the afternoons. She gets her trade name Belle de Jour as acknowledgement she’s only available from 2 p.m to 5 p.m., where her clients include a sadistic overweight candy manufacturer (Francis Blanche), a role playing professor (Marcel Charvey) who likes to dress in a bellboy’s uniform and abuse the whore, a hulking Japanese man carting a strange buzzing box, a debased duke (Georges Marchal) acting out a bizarre mourning scene in a coffin, and a menacing gangster (Pierre Clementi) with a mean looking gold tooth, who falls in love with her and stalks her to where she lives with dire consequences. Becoming a prostitute satisfies Belle’s masochistic urges to be dominated and humiliated, something hubby is not capable of. She’s also pursued by hubby’s wealthy womanizer friend (Michel Piccoli), who only retreats when he learns about her day job.

The film follows our heroine’s fantasies and real-life adventures, and reaches for a startling conclusion that can be interpreted as either part of her dream world or everyday experiences or a mixture of both. Buñuel lets us judge for ourselves whether it’s real or not. What the director does so well is create a stunningly beautiful mood that enhances a sublime tale about a decaying upper-class society that debases everything it touches, from love to religion to business. 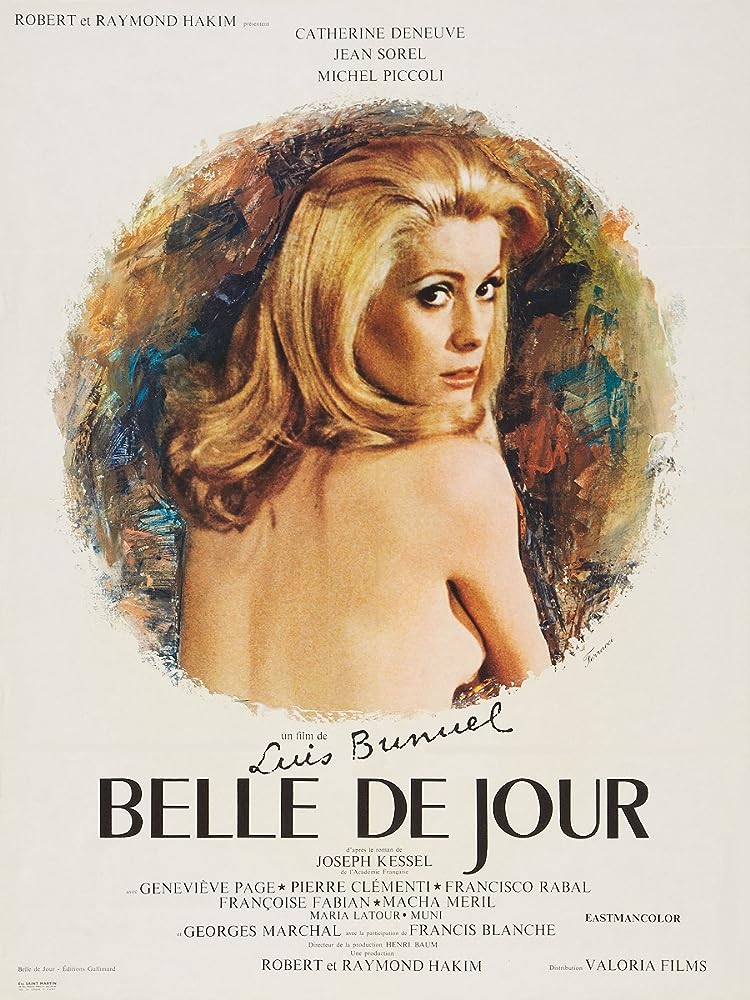