What gives this film its unrelenting chills and thrills is that the amoral Fiorentino was so mean-spirited and crass, showing off her big city New York attitude and her willingness to ‘talk the talk’ and f*ck the pants off her boyfriend while maniacally outwitting her husband.

Bridget Gregory (Linda Fiorentino) talks her weak-minded NYC doctor-husband Clay (Bill Pullman) into pulling off a risky $700,000 drug deal–of him switching pharmaceutical medicine cut into cocaine for the cash, which he needs in order for him to pay off his debts to the loan sharks. But Clay slaps her when he returns from the nerve-wracking drug deal after she calls him stupid for walking through the streets with the wads of money tucked under his shirt, and when he is in the shower she impulsively sneaks out with the money and leaves by car for Chicago. She ends up stopping off in a small hick town outside of Buffalo.

In the small-town of Beston she goes into Ray’s bar and attracts the local yokel Mike Swale (Peter Berg), who just returned from living in Buffalo after being mysteriously married there. He hates this town but doesn’t have the nerve to leave it again after his bad experience in the big city. She wastes no time in having a sex-only-relationship with him and keeps him distanced from her by referring to him as a rube and a sex-object. He cries out for a real relationship where they can also be friends and share things, and seems to go along with her dominating him only because he doesn’t know any better. She contacts her NYC lawyer (J.T. Walsh) for advice, worried that Clay will come after her and that she can’t spend the dough freely without him claiming half if she’s still married. The lawyer tells her it will take about two years to get a divorce and that she should stop running and find a small-town to hideout in until the divorce comes through.

Remaining in town she gets an insurance management position and tells her new boss that she has to use the name Wendy Kroy, because she has a restraining order of protection from her abusive husband. She is surprised to find that Mike works at the same place as a claims adjuster, but slyly keeps him away from her saying his sexual advances are not good for her corporate image. After she rents a house and doesn’t tell Mike where it is, she soon lures him to her house after she comes up with an outlandish scheme to get Mike to help her keep the money. She tricks him into killing her husband (Mike is not aware that it is her husband).

Mike is not the killer type, so she had to work hard to find something on Mike that could get him to even consider her scheme. When she finds out his nasty secret she easily manipulates the hapless sucker by playing with his head and giving him the best sex he ever had, and playing further mind games by sometimes allowing him a quick peak into her private space.

Clay’s private detective friend (Nunn) traces her call. He goes to Beston because he is promised a certain percentage of the money he recovers. Clay by not paying off the Mafia debts, now has a broken thumb and he is reduced to doing illegal drug prescriptions for junkies to keep himself alive. He is desperate to get his hands on her and the cash. When the enforcer manages to catch up with Fiorentino and forces his way into her car, she ingeniously rubs him out in a car crash when he gets caught with his pants down, just before he was going to put the squeeze on her and get the drug cash.

The film builds to its dark climax ingeniously, with Fiorentino delivering a virtuoso performance. She goes from sexually appealing to dangerous. Fiorentino seems to have drawn the same personality type of man to her in husband and boyfriend, both with insecurity problems. They are unable to resist the insane attraction they have for her. Pullman and Berg are splendid as supporting characters, making her relationship with them to be outlandish but plausible. It’s an unpretentious film that delivers a bad attitude. 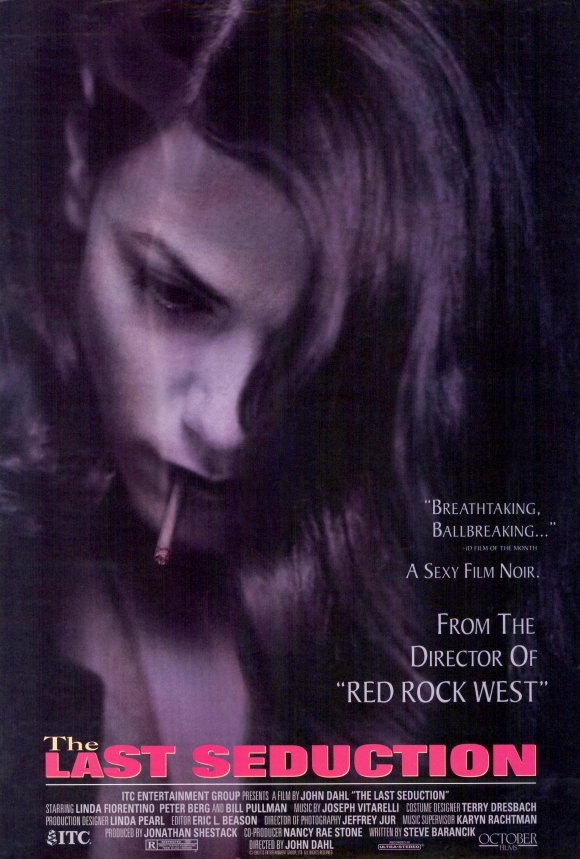