LAST OF SHEILA, THE

“Campy gamer thriller that wasn’t as much fun as it pretended to be.“

Herbert Ross (“The Owl and The Pussycat”/”Funny Lady”/”Undercover Blues”)directs this campy gamer thriller that wasn’t as much fun as it pretended to be. It’s written by composerStephen Sondheim and actor Anthony Perkins (both gamers). It involves a game of ‘whodunit’ among a group of Hollywood players, played by an all-star cast as if it were actually a game that looks like an inspired Agatha Christie drawing room competition for who is the most beautiful person in the room. The film was disappointing, as it was plodding, filled with too many red herrings and was too heavily plotted.

Eccentric movie kingpin Clinton Green (James Coburn), who has a puckish nasty streak, is still steaming over the unsolved murder of his gossip columnisttrophy wife Sheila, who a year before was the victim of a hit-and-run driver after leaving a party in Bel-Air. Clinton suspects that one of the six party guests, all friends, is the killer and plans an elaborate trap for the culprit by inviting the six of them for a week cruise on his yacht along the Mediterranean and having them indulge him by playing his game of secrets. They all attend because they want work or don’t want to get on the bad side of the vindictive influential producer. Each guest receives a card with a secret that one of the other guests has. The secrets are shoplifter, homosexual, ex-convict, informer, little child molester, and alcoholic (think Sheila!). The six guests are hack screenwriter Tom (Richard Benjamin) and his wealthy socialite wife Lee (Joan Hackett); sexpot actress Alice (Raquel Welch) and her has-been director husband (James Mason); the ambitious wannabe associate producer boy toy Anthony (Ian McShane) and his bitchy hottie talent agent companion Christine (Dyan Cannon). All the guests obligingly go along with such unusual entertainment that is designed to reveal their darkest secrets and to Clinton who is the killer, but someone changes the rules of the game at an old monastery leading to deadly results.

The slick but flat pic was shot in the south of France. It revels in how those in Hollywood are so ambitious and that being amoral comes as easy to them as stabbing someone in the back with an ice pick. 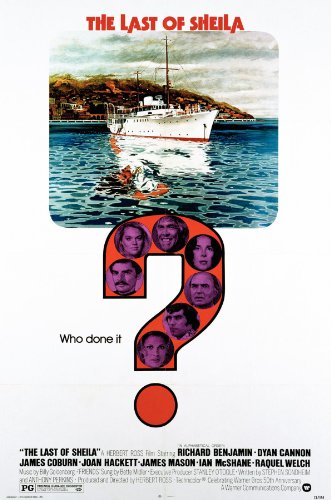