“Has some dazzling surreal visuals to keep it from being derailed.”

Argentinean filmmaker Eliseo Subiela (“The Dark Side of the Heart”/”Man Facing Southeast”/”Don’t Die Without Telling Me Where You’re Going”) helms and writes this slightly pretentious artsy rambling psychological dramedy that never coheres as a whole and its characters are more symbolic than fully developed; but it has some dazzling surreal visuals to keep it from being derailed.

Roberto (Lorenzo Quinteras) is a shlumpy middle-aged insurance salesman whose ten-year childless marriage (Alicia Aller) has become dried up and the unhappy camper dreams of writing a novel, which he struggles with because of writer’s block. While waiting on the subway platform for his train to work, Roberto spots a pretty young woman about to throw herself under a train and rescues her. When he takes her out to eat, he discovers it’s an act and that she’s a prostitute named Estelita (Noemi Frenkel) trolling for customers. Not angry about the deception, Roberto thinks she might be a perfect subject for his novel and is willing to pay her to get details about her colorful life so he can use the material for his novel. She soon invites him to her dank suburban home, outside of Bueno Aires by the River Plate, where he meets her elderly mother who is devastated that her philandering husband abandoned her and the four children a long time ago. Roberto also meets her weird three brothers: the gun-toting psychotic stickup man Jose (Pablo Brichta); the withdrawn obsessive dropout philosophy student drafted into the army by the military dictator Peron to fight for ‘the apocalypse brigade’ and now a grower of squash, Claudio (Hugo Soto), who without rhyme or reason eliminates words to use in conversation and tries without success to poison his mother; and the dreamer Mario (Andres Tiengo) who is building an airplane on the terrace but is afraid to fly it because it might fail. If these characters weren’t bizarre enough there’s also the conceit of Christ (Alfredo Stuart), who comes down from the cross in the local church to consult with Estelita about her affairs and accept her offering of salami.

Because Roberto’s life is so empty, he gets completely submerged in the affairs of the eccentric, miserable family and becomes deeply enchanted by Estelita to the point he loses his job and abandons his wife, and is reduced to writing probable robbery scenarios for the crazed Jose.

Subielo’s exploration of the artist at work is least interesting when it resorts to flatly telling us that “great salvation doesn’t exist, only small salvations.” But it rebounds when it comically shows the absurdity of the human condition by bringing out the satirical madness of its loony characters and lets us drift along in a nonjudgmental way with their rich fantasy life that sustains them into thinking that they’re survivors and there might be hope for such losers after all.

The offbeat story moves along at a slow pace and might further irritate some with all the illusory games it plays with reality (like those plastic-shrouded subway riders), but it seems to have an admirable purpose to its zaniness, is thoughtful, well-acted and original. I stood with it despite having serious misgivings, and when the dust cleared I was glad I did. 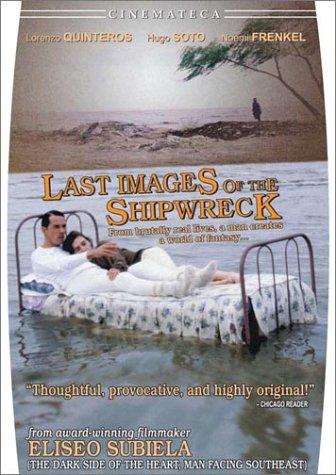