“Stuhr’s directing seems ambiguous on how to handle its rich findings.“

Jerzy Stuhr (appeared in many Kieslowski films) directs and stars in this gentle satire that turns dark at the midpoint, but he never realizes what to do with its recovered observations about a stuffy society being exposed for its ingrained pettiness. Stuhr’s directing seems ambiguous on how to handle its rich findings and the film only stumbles to the finish line more proud to finish on a happy note than win the day. The black-and-white film is bleakly observant of human nature but lacks ferocity to take it further than being a modest parable about such things as freedom, love for animals, commercialism, bureaucracy, bigotry, conformity, jealousy and neighborly relationships. It’s based on the recovered 1970s screenplay of Krzysztof Kieslowski (he died at age 55 in 1996), who adapted it from a short story by Kazimierz Ortos.

The film’s main attraction is a mammoth camel abandoned by a traveling circus that stumbles into the yard of a colorless middle-aged couple living in a small Polish country village, Zygmunt and Marysia Sawicki (Jerzy Stuhr & Anna Dymna). The couple soon becomes fond of the animal and decide to keep it despite the drawbacks of keeping such a strange animal as a pet. Bank clerk Zygmunt proudly takes it for regular walks on a leash through the center of town, where initially he’s greeted by good-natured humor and envious delight. Later on the good citizens out of jealousy and resentment turn against him in displays of fear and hatred. The absurd comical figure of the two-humped camel regally paraded through town is the image that is frozen into this satire. But the film’s most engaging shot, is of the huge desert animal shoving his fuzzy head through the couple’s window during mealtime.

When the locals show their fangs: the clerk is bounced as the clarinet player in the town’s amateur orchestra; bureaucratic officials notify him that the residents are complaining his beast befouls the streets, children are late to school because they are distracted by the animal, and it might be diseased with an African virus; he’s also informed that he’s run afoul of zoning and tax ordinances (when the officials can’t find a camel listed on the tax schedules for livestock, they tax him using a horse as the guideline); one town leader annoys him by stating the camel is “useless to the community;” parents forbid the curious schoolchildren to visit the camel; protesters stand in front of his yard and angrily glare; and Zygmunt finds he’s no longer made welcome when leading his camel around town.

The metaphorical camel (a symbol for the useless things in life that nonetheless give joy) awakened in the routine-living Zygmunt a renewed interest in life, but it also sadly made him see the dark side of his town he never saw before. All Zygmunt wanted to do was care for and love the animal and not exploit it by making money through TV commercials or through charging people for having their photo taken with the camel. The camel in a revolt for his freedom, breaks free from his stable and vanishes just as suddenly as when he appeared. Without the camel, Zygmunt is accepted back into the fold but he has digested too much to return to his former life without having reservations (sort of like Kieslowski registering his despair with the Communist regime and not knowing how to fit into it again when it has been so exposed). 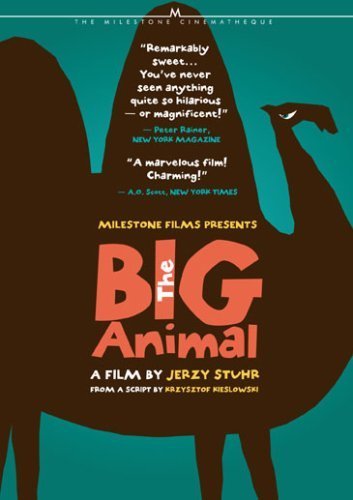