“Sentimental drama about an elderly Jewish selfless doctor in the Brooklyn slums, who cares about his patients even if they have no money or are jerks.”

Sentimental drama about an elderly Jewish selfless doctor in the Brooklyn slums, who cares about his patients even if they have no money or are jerks. It’s watchable because of former Yiddish star Paul Muni playing with hammy passion the Brownsville bleeding heart liberal doctor, in his final screen role. Muni was 63 at the time and died 8 years later. Director Daniel Mann (“Come Back, Little Sheba”/”I’ll Cry Tomorrow”/”The Teahouse of the August Moon”)allows the black and white film to look like a television drama. It’s adapted from the popular 1956 novel by Gerald Green.

Harried TV-producer Woody Thrasher (David Wayne) tells his wife (Betsy Palmer) that he might lose his job and thereby the family might lose their over mortgaged suburban home if he doesn’t immediately come up with a new idea for a TV show to satisfy the drug sponsor (Robert F. Simon). When Woody reads in the Daily Mirror a story about a doctor who calls for an ambulance for a battered woman dropped off by thugs at night on his doorsteps and the article tells that the dedicated doctor has been a beacon of light in his slum Brooklyn neighborhood for the last 45 years and calls him a “Good Samaritan of the slum,” the gimmicky driven producer takes a car ride out to see Dr. Sam Abelman (Paul Muni). The grumpy doctor is an angry man, upset with others who don’t have his desire to treat everyone fairly and calls these unfeeling people “galloots.” Sam turns down the reality TV program, but his 24-year copyboy nephew Myron Malkin (Joby Baker), who called in the article to his editor, gets Sam’s long-time loyal wife Sarah (Nancy R. Pollack) and Sam’s best friend, college classmates, the successful specialist from Eastern Parkway, Dr. Max Vogel (Luther Adler), to try and talk Sam into doing the show. The wife refuses, but the wily Dr. Vogel gets the producer to get the sponsor to buy Sam a house in a better Brooklyn neighborhood.

When Sam agrees to do the documentary show, which will show him interacting in his office with his patients, as he does not know about the house, Sam’s called away to treat a hostile and ungrateful nervous black teenager hoodlum (Billy Dee Williams, his film debut) he diagnosed with a brain tumor and is in a precinct house jail because of an auto theft. While climbing the precinct stairs, Sam has a heart attack and dies before the show can be made. What happens next is left in the air, except it signals that the city is changing for the worse if the true believing liberals are dying off and that the rush to the suburbs to escape crime will soon be a reality of the landscape. We do learn that Woody is inspired by Sam and tells his wife he will quit and get a job where he can be honest. His supportive wife tells him don’t worry about the kids, “they’re like weeds and could grow anywhere.” Whatever that means, that’s how this melodrama ends.

It was remade in 1974 for television, where it belongs, with Pat Hingle in the Muni role. 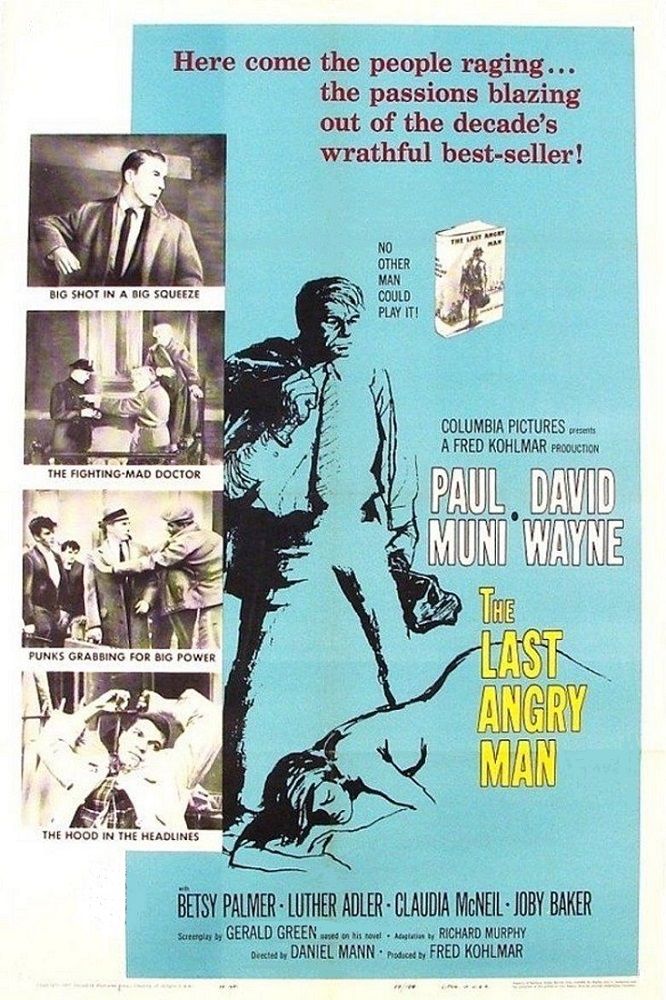