“Basically the film is an excuse to show off the period’s silk tapestry and costumes, and a number of colorful and well choreographed battles.”

Director Zhang Yimou’s follow-up to “Hero” is another martial-arts pic that is also wonderfully photographed, and light on storyline and character development; it also tacks on a woefully unbelievable romance story, which is more laughable than romantic (the cornball twisty ending is even more absurd than most Hollywood sudsers would dare attempt). These two Hong Kong action pics have given Zhang a reprieve, in his sullied post–Gong Li period, after the last few sentimental neo-realism middle-brow works (“Not One Less”/”The Road Home”) have put a sizable dent into his growing rep as an international artiste. Zhang makes hay here by using the latest in digital, upgrading the genre’s already proven dazzling special effects by outshining Ang’s “Crouching Tiger, Hidden Dragon”, splashing together a color-coordinated eye-catching CGI landscape to look like a Hallmark Card background for the action scenes, smartly filming in the Ukraine scenes similar to those gorgeous New England autumn foliage and, in his obsession to get even the smallest details right, outfitting with pretty matching all-green uniforms the gang of Flying Daggers; the resilient filmmaker has revived his career by now making empty commercial films that are pointless, unmoving and big box office works. If his box office returns don’t make Hollywood envious–they should.

Set in 859 AD during the dying days of the Tang Dynasty, long past its peak when it was known for its enlightenment, two government deputies, Leo (Andy Lau, Hong Kong superstar) and Jin (Takeshi Kaneshiro, Japanese-Taiwanese actor), both captains based in Feng Tian County, close to the Imperial Capital, scheme to entrap a blind dancer/courtesan in a brothel, Mei (Zhang Ziyi). They have information she is the daughter of the deceased former leader of the secret rebel group called the House of Flying Daggers. The government is reeling from corruption charges and the Flying Daggers, a guerrilla type of organization, has gained popularity among the masses by trying to bring the government down by stealth tactics and stealing from the rich to give to the poor. Lady killer Jin goes undercover and pretends to be a drunken vulgar patron in the brothel called the Peony Pavilion. After both courtesan and patron are arrested for indecency: Jin will free Mei from jail. It is hoped Mei will learn to trust her seducer and lead Jin in their escape to the new unknown leader of the Daggers. Along the way they both play at falling in love but, in fact, they are falling in love for real. But they are also both secretive and heavy with thick thoughts, fearful of letting go of what’s in their hearts. By the end of the trail, in an autumn shaded birch forest that turns on the dime into a bloody snowy winter scene, the loyalties of Leo, Jin and Mei become questioned as the film has at last found the passion it was looking for to undress the porcelain beauty of its heroine–the beautiful desired object of both master swordsmen. The problem is that this one truly wonderful moment of intensely lustful absurdity (so off the wall that I couldn’t stop laughing when I was supposed to be crying) can’t make up for the close to two hours of humorless tedium that took place beforehand.

Basically the film is an excuse to show off the period’s silk tapestry and costumes, and a number of colorful and well choreographed battles (each with some dashing displays of swordsplay and with all of the following weapons flying with the speed of a bullet: digitized arrows, stones, daggers, and bamboo rods); It starts with the splashy scene in the brothel (a mixture of swords-play and the enchanting Mei dancing in a ring of huge colorful drums), then the centerpiece battle chase scene that is artfully carried out in a dense bamboo forest, and finally it turns cartoonishly bloody in the wacky fight ‘to the end’ in the birch forest. 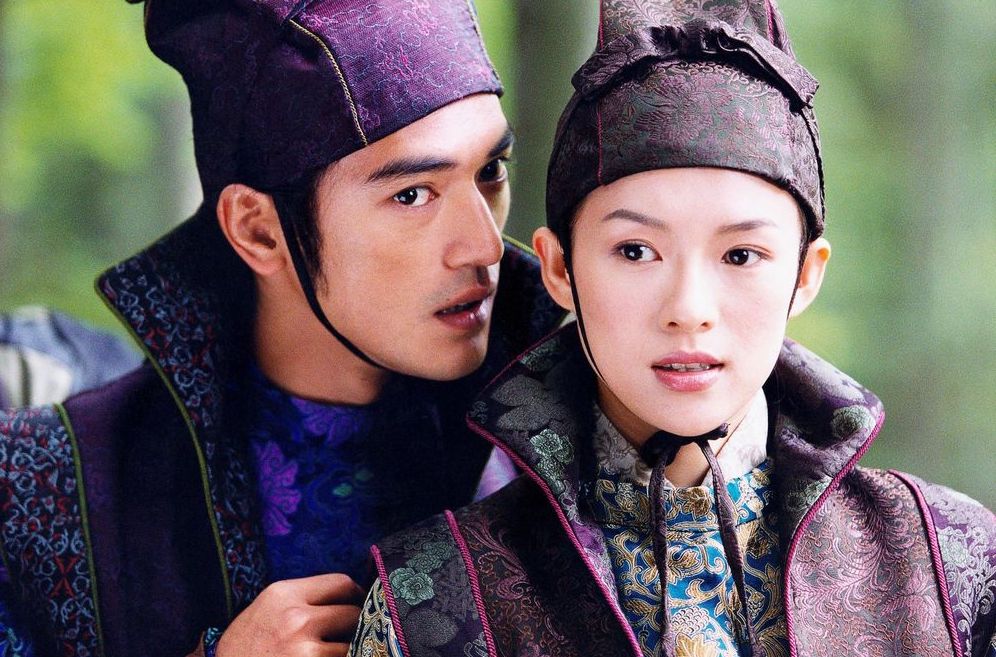