“Always confounding even when it seems accessible, the mysterious and gripping plot raises unanswerable questions about time, memory and the progress of life on this planet.”

The leftist French writer, photographer, editor, videographer, digital multimedia artist and filmmaker Chris Marker (“Sans Soleil”), directed and wrote “La Jetee” (which means The Pier). It’s perhaps best known today as the movie that inspired Terry Gilliam’s 12 Monkeys. But it would be remiss not to point out that this film shot on a shoe-string budget and only being 27 minutes, still had a much greater impact than the bigger budgeted full-length feature.

Always confounding even when it seems accessible, the mysterious and gripping plot raises unanswerable questions about time, memory and the progress of life on this planet.

It’s a fictionalized account of a Paris just before and after World War III. It begins at the pier of Orly airport some years before WWIII, where there’s a haunting image of a woman’s face at the end of the pier. It follows a man with no memory, living in the post-World War III Paris, who is a survivor prisoner that underground commanders use as a guinea-pig in a time-travel experiment run in their lab. This man was chosen because of his vivid dreams, showing he’s obsessed upon the image of a young blonde woman’s shocked expression after witnessing the shooting of a man; he was a young boy at the time when he was visiting the pier at Orly before the big war. The man is given a chance by his captors to discover for himself the true significance of this incident. It leads to his return to the past via dreams, turning down a trip to the future, and falling in love with the same woman he saw at the pier who is now sleeping. She opens her eyes, which is the only shot in the pic of movement–like in a film.

It’s a tantalizing sci-fi short film, one I believe is a masterpiece, that leaves us pondering over an impenetrable puzzle about mankind, its future and the importance of love in a world where there doesn’t seem much else to hold onto that’s as tangible. 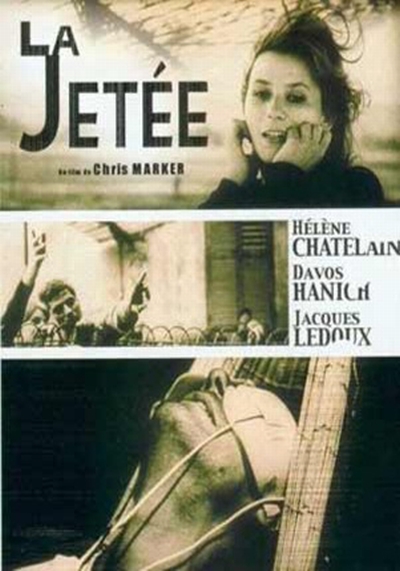