OF TIME AND THE CITY

The 64-year-old Terence Davies (“The Long Day Closes”/”Distant Voices, Still Lives“/”The House of Mirth”), who was born in 1945,is one of England’s best filmmakers, though he only made six films in his long career. In this mesmerizing documentary, a visual poem, that’s narrated by Davies as a solemn rite in his evolutionary process. Davies draws upon the first 28 years of his life in Liverpool to give us his evocative bold personal take on what has passed. In 1973 Davies left the city he now calls “anus mundi.” The images speak to us of the auteur’s reflections of his drab hometown, its working-class roots, its football clubs for the masses, its haughty official architecture, its lavish cathedrals (where one of them is transformed into a trendy restaurant), the enormous poverty (being poor is something you think about all the time), the place where the Beatles (a group he disdains) started, footage of Queer Time as the Grand National sweepstake winner in the famous race held annually, and the filmmaker’s childhood guilty pleasures in wrestling (the thrill of seeing men touch caught his interest more than the fighting) and Hollywood musicals. There’s footage of kids playing in the street, rows of humble but dull slate-grey houses, housewives hanging their laundry outside on lines, family trips to the seaside and his sarcastic take of the pomp royal coronation (calling the monarchy the “Betty Windsor Show”) and of the middle-brow Liverpudlian culture. These images give way to Davies telling us about his love for Mahler, that he’s glad to be a reborn atheist and removed from his empty early experiences as a pious Catholic, revisiting his once Catholic guilt-trip over his homosexuality and offering quotes from such heavyweights as T. S. Eliot, Yeats, Joyce, Jung and Engels. Davies takes a few swipes at the vulgarization of modern Liverpool, how its utopian housing estates are an ugly sight and how his countrymen have a genius for creating urban projects that are “dismal.”

Davies takes more pleasure satirizing his city than sentimentalizing it, and comes across as a brooding whiner who happens to be a perceptive and witty curmudgeon. Painfully looking back at a time that no longer exists but once meant the world to him as a child, brings out a real anger that he will not muffle. The negativity directed at a Liverpool Davies no longer recognizes, but still has a soft spot for. It’s charming without trying to be charming, and effortlessly eloquent…which is lovely, I think!

The Liverpool city officials commissioned Davies to make a film about his native city to celebrate its designation as European Capital Of Culture 2008. I don’t think it turned out to be the love letter they expected, but it does show how a city can influence life for the better and also leave painful memories. 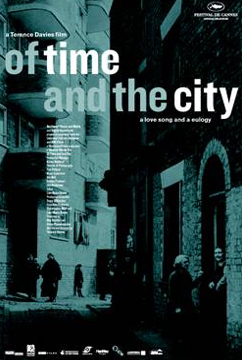