“An exciting and entertaining actioner.”

An exciting and entertaining actioner that tests the plausibility of its story with an unreality check; yet, it is real on its emotional levels testing the heroine’s reactions to love, guilt, loss of identity, and a deprived upbringing. It is rare for an action genre film to be so concerned with actual human values. Anne Parillaud, the wife of Luc, plays Nikita with a flair, exhibiting the tremendous energy and orneriness needed to make her performance exceptional. The film plays like an MTV special, using a splash of coloring to light up the screen and very fast-paced action sequences to keep you mindlessly glued to the screen. But that is disarming, since this film has more than that to offer even if it does not seem so during certain stretches. It is worth sticking with this film, it gets better and less predictable the more you get into it. Though its ending, leaves a lot to be desired.

Nikita is a violent junkie who gets caught in a bloody robbery. She gets a life sentence and is turned over to the government so she could train to be an agent, doing the dirty work such as assassinations. This part of the story lags as we watch how this violent misfit channels her anti-social aggressiveness into acceptability for her new role in life one that society, supposedly, can appreciate. Her teacher is Bob (Tcheky); he falls for her but plays it on the up-and-up remaining dedicated to the government he works for, never questioning their ruthless and unethical tactics. As we can easily surmise she proves herself fit for her assignment, and everything hinges on how she will fare on her first job.

Jeanne Moreau has a nice cameo in Nikita’s schooling scenes, teaching the 23-year-old how to be a woman. There is one great scene where we see the young Nikita putting on makeup next to Moreau; and, it’s interesting to look at the faces of the two stars with Moreau, wrinkles and all, still looking quite sexy and alluring and in my way of looking at things — the one who is still the more alluring.

With Nikita’s graduation from spy school, she is now a secret agent who will answer to the code name Josephine. She is given money to set up an apartment and a new life of her own since the government has done a mock funeral for her and she has no relations who will ask questions about her, she is now completely reborn as a new person. She quickly meets a checker in a supermarket, Mario (Anglade), and they fall in love and move in together. She remains mute about her biography, demanding that he asks her no questions as she continues to go on hit man assignments for the government, in a seemingly never-ending redemption for her past crimes.

Nikita’s final assignment goes awry as a cleaner, Victor (Reno), is called in to mop up after the important mission is aborted — of stealing documents from an ambassador’s safe that will link some private companies to some shady dealings. Victor is menacing, brutal, and maniacal; and, this mayhem convinces Nikita that it is time for her to move on.

So we have come full cycle and Nikita has developed an appreciation for life that she never had before. Her journey leaves us with much moral fodder to chew on, more so than do most action pics of this type. 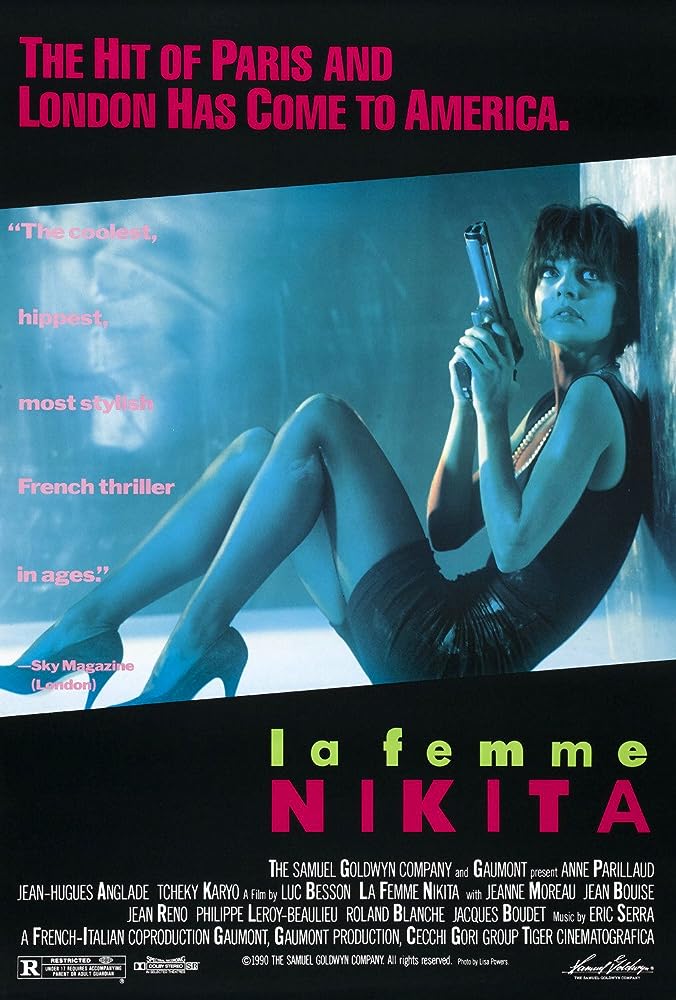