“All the heavy moralizing that comes after the nutty scenario soon becomes tiresome, and it left me wanting to hang-up on this film.”

Phone Booth is a compressed 80 minutes of a cheesy one-trick B-movie, that has an unneeded big budget it can’t justify. It’s written by the king of exploitation films Larry Cohen (“God Told Me To“/”Q“) and directed by the ham-fisted Joel Schumacher (“Batman Forever“/”Flatliners“). It’s too bad Cohen wasn’t the director, as he might have had more fun with the pulp scenario and leaned more into its abstract qualities. The snappy dialogue kept the film edgy, and kept me glued to the screen as if it were a breaking news story on CNN. My favorite Cohen line was delivered by the trapped Colin Ferrell, who breaks out of the phone booth and shouts: “I’m just part of a big cycle of lies. . . . I should be president!”

Because of the terrorism involved, this film was one of many whose release was delayed post- 9/11 so as not to be offensive. It was scheduled to open last fall, but the Washington sniper incident hit too close to home and the studio moguls decided on the delay. The film plays off the daily newspaper headlines and America’s love affair with celebrities and pop culture, as it tells about a serial-killer sniper who has a moral logic to his insanity of targeting immoral individuals.

The film is set entirely within and around the area of a phone booth located near Times Square on 53rd Street and 8th Avenue in Manhattan, as a methodical sniper has a high-powered rifle pointed at a smart-ass, fast-talking, double-dealing, small-time NYC showbiz publicist Stu Shepard (Colin Ferrell) and forces the vic to confess to his lies or else he will die. Stu made the mistake of picking up the ringing public phone after talking to his client and would-be girlfriend at the booth, rather than using his cell phone and having his wife know whom he was calling when she checks the phone bill. The phone booth comes to resemble a confessional booth, as the sicko sniper (the voice of Kiefer Sutherland) badgers Stu to recognize that he’s been a bad human being and to confess by phone to those he deceived. The sniper threatens to kill the flashy outfitted and Bronx accented Stu or others in the street if he hangs up and leaves the booth. To show he means business, the sniper shoots up the toy of a Nigerian street vendor. When a pimp (Enos) comes to get Stu forcefully out of the booth because his hookers need to use it for business, the sniper takes him down. This results in a massive police presence consisting of a swat team, and the presence of Captain Ramey (Forest Whitaker) to take charge of the scene. The captain is unaware of the sniper and tries to talk the man in the booth into surrendering peacefully, thinking he’s dealing with your typical NYC nut case killer.

The melodrama is played out under the scope of the sniper’s high-powered rifle, hordes of curious onlookers, and in front of the circus-like mass media coverage that congregates to make this the hot-button story of the day. The raunchy publicist who is sweating bullets has to use his wits to placate his mysterious caller, who insists that Stu loses his arrogance and tell the attractive aspiring brunette actress Pamela (Katie Holmes) whom he wants to screw that his intentions are not honorable and that he’s a married man. Stu has to also tell his caring blonde wife Kelly (Radha Mitchell) that he lusts after Pamela. While Stu’s into confessing, he apologizes to his unpaid young assistant Adam (Nobbs) that he’s just been using him and stringing him along to do his dirty work without any hope for the future. There’s also an innocent pizza deliveryman, who gets mixed up in this incident when he delivers a pizza at the booth upon the request of the sniper.

Phone Booth caught the artificial and frenzied atmosphere of the cable TV and tabloid world, of the corporate world caught up in either a rating or circulation war and who could care less about anything else. Colin as the film’s antihero owns up to his dismissive nature of others under the threat of a gun, a novel way to become sincere, but he never becomes someone we care about. Colin is used as a foil to take pop shots at the media and be the target of the filmmaker’s moral bullets. Hey, don’t get me wrong, the media deserves the heat, especially considering the way they shamelessly spin such a topical story. But Phone Booth never gets past that point. It didn’t have the same staying power as Billy Wilder’s 1951 The Big Carnival, where the way those in the media fake their concern for the victim becomes the real story. This is just a one-act pulp film, that should have been either funnier or deeper. But all the heavy moralizing that comes after the nutty scenario soon becomes tiresome, and it left me wanting to hang-up on this film. 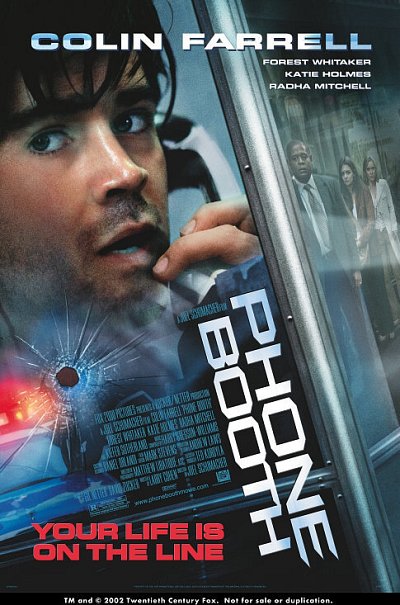