NO TIME TO DIE

“It will probably leave its fan base satisfied to be once again shaken … and stirred.”

The 44-year-old Cary Joji Fukunaga (“Sin Nombre”/”Beasts of No Nation”) is the first American (of Japanese heritage) director of a Bond film (in this 25th Bond film) and he also has the honor of helming the longest Bond film ever clocking in at 163 minutes, in this pandemic-delayed by 17 months film that finally makes it into theaters this September. It’s also the last rodeo for the 53-year-old Daniel Craig (arguably the second best Bond to Sean Connery), as the super-cool British Agent 007 picks a good film to go out on in a high note.

It opens to a slow-moving Billie Eilish theme song that drones on for a great part of this lengthy film, a film that becomes confusing at times because of its wobbly execution. It’s also  a Bond film that goes on for too long and ends on a rather prosaic note after taking us on a wild but entertaining ride.

Fukunaga and a team of co-writers Neal Purvis, Robert Wade and Phoebe Waller-Bridge cleverly create a conventional (but enhanced by the visions of cinematographer Linus Sandgren, the first Bond film to be shot using large-format 65mm IMAX and Panavision cameras). The timely Bond spy film still has the usual Bond quirks, quips, car chases and killings to savor.

In his last pic, Bond (Daniel Craig) opted to retire in the idyllic countryside of Italy and live a quiet domestic life on a permanent vacation with Madeleine Swann (Léa Seydoux) without traveling all over the world.

But Bond has ghosts from the past to contend with, as he visits the grave of his doomed lover Vesper Lynd, from Casino Royale (2006). While at the mausoleum, a bomb goes off and the retired spy is on the run from some gun-toting foes and believes this incident happened because Swann set him up–as he delves more into her secretive checkered past and her connection with the main villain and with a renown mastermind world criminal.

No Time To Die picks up several years after Sam Mendes’s Spectre (2015). Bond is retired in Jamaica, 5 years after splitting from Madeleine, as he gets a visit from his old American chum from the CIA, Felix Leiter (Jeffrey Wright), who asks him to rescue a kidnapped Russian scientist (David Dencik), with ties to SPECTRE, and to track down a mysterious soft-spoken, facially deformed madman villain, Lyutsifer Safin *(Rami Malek), a botanist and a terrorist. He’s armed with a high-tech weapon that can release a pathogen that can be communicated like a virus, and if targeted specifically to a person’s DNA it can be used to assassinate someone without leaving a trace).

This brings Bond to an island compound off the coast of Japan, as the retiree goes on his last mission to chase down the bad guy and save the world.

The entire cast is terrific, both the bad and good guys. The good guys are: Lashana Lynch as Nomi, the new quick-witted Agent 007, who tells the former Agent 007 his methods are neanderthal; Ralph Fiennes makes for a great M; Bond’s loyal secretary Moneypenny (Naomie Harris) contributes some welcomed light moments with her banter; Ben Whishaw’s Q is perky, telling us he’s always available to serve his country as the quartermaster; while Ana de Armas catches our attention as a fledgling agent. On the bad guy side: the strangely foreign-accented and misguided Malek makes for the usual cartoonish Bond villain who foolishly thinks he and Bond are alike, David Dencil’s shifty Russian scientist conveys a campy turn of someone who is betrayer of M16; while Bond’s imprisoned arch-enemy mastermind criminal, Blofield (Christoph Waltz), stirs up some bad memories in a visitby Bond to see  him in his prison cell.

It’s the best Bond since Casino Royale, but is not without some significant faults that include a too sweet ending and that it should have been cut almost in half. But it will probably leave its fan base satisfied to be once again shaken … and stirred. 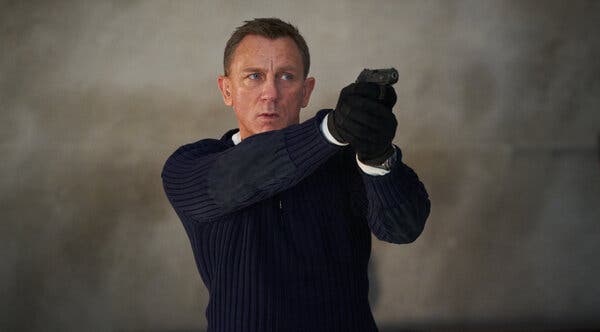 MASTER OF THE HOUSE