“Didn’t have enough heart for me to find its soft spot.”

This is the last leg of controversial Korean so-called auteur Park Chan-wook’s “vengeance” trilogy which began with the awful “Sympathy for Mr. Vengeance” (2002) and was followed by the overrated “Old Boy” (2003). This sullen dark comedy and avenging angel actioner is the most bearable of Park’s trilogy (he tones down the violence) but still didn’t have enough heart for me to find its soft spot. Park is the Quentin Tarantino of South Korea, which means he’s a shockmeister filmmaker in love with Kill Bill pop culture violence as a means of drawing comedy.

In this offbeat grotesque thriller about a botched kidnapping and murder, Park goes all out to express a cynicism about society and present a pic filled with torture and various other over-the-top brutalities (including a puppy dog’s head blown off off-screen, men tortured, women raped, and children who appear in snuff videos their grief-stricken parents are forced to watch). All the cathartic releases from watching the banal nasty get his just deserts by the end doesn’t quite satisfy this viewer, despite the pic being technically up to speed, mainly because of the story line implausibilities, the hollowness of the project, the crassness of all the violent exploitation scenes and the fuzzy political overtones hinted at that never have traction. The shocker serves as a pulp fiction vehicle for tasteless gore as fun and games, that’s served well only because of the satisfactory though lightweight performance of the star Lee Yeong-ae and the stylish craftsmanship displayed by a chilling Park at his most proficiently outlandish.

The gentle heroine Geum-ja (Lee Yeong-ae) after serving 13 years in prison (from 1991 to 2004) for the killing of a little boy over a kidnapping when she was twenty-years-old is released on parole and in public presents herself as a model citizen who has reformed. She even apologizes to the boy’s parents for the killing. But she’s bent on revenge for being wrongfully imprisoned and lets on to no one that she’s innocent of the crime that she was forced to confess to (only a grouchy cop doesn’t believe she’s guilty–Nam Il-woo). To carry off her vendetta Geum-ja has been doing extraordinary favors for various fellow inmates during her prison stretch in order to get them to help her exact revenge on the one who set her up. The cellmates include Woo So-yeong (Kim Bu-seon) and Oh Su-heui (Ra Mi-ran), as for one Geum-ja donates a kidney and for the other she poisons a dyke bully named “The Witch” (Kho Soo-hee). We eventually learn that the real culprit was Geum-ja’s kindergarten schoolteacher Baek (Choi Min Sik), who helped her through her teenage pregnancy, abducted her infant daughter and threatened to kill the child if she did not take the rap for him. Once on the outside Geum-ja rejects a chance at salvation offered her by eccentric jailhouse preacher Jeon (Kim Byeong-ok), takes a bakery job, hooks up with her former inmates and eventually reunites and takes back her missing daughter who was adopted (renamed Jenny) and taken to Australia to be raised by her wacky Aussie foster parents.

The last half hour boils down to how Geum-ja will get even with serial killer Baek in the most cruel way possible through vigilante justice, with a little help from her cellmates and the parents of other children kidnapping victims (it couldn’t adequately be explained why these folks would trust a convicted child killer), as the talented but rather shallow Park can’t resist going for torture scenes mixed in with a strange comical scene of cake in the face slapstick to tell a story that makes little sense. It elicits no real sympathy for the innocent Geum-ja, who remains silent during her long incarceration while the real killer continues to operate freely and who in the revenge process turns into a cartoonish character. And even though it ends with a hug and some hope that our heroine can find redemption, it all seemed like just a futile exercise in grandstanding for the showoff filmmaker who seemed to care less about the justice system or that little kids were being abused and slaughtered than he was about filling the screen with shocking attention getting scenes. 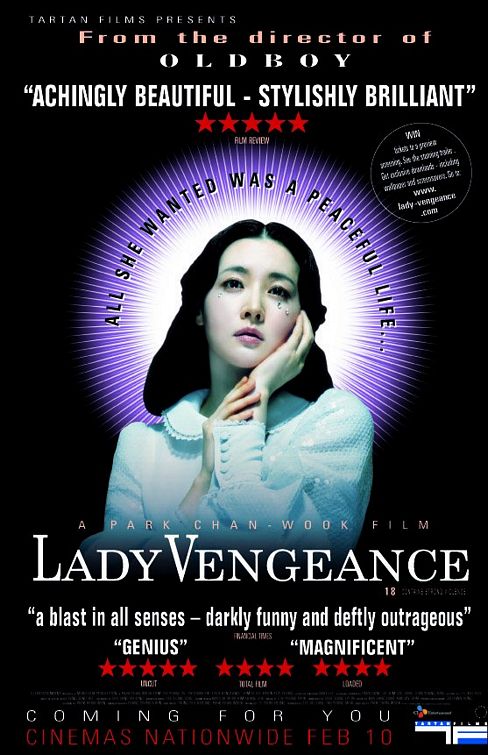