“Hitchcock at his freshest and lightest.“

This is a brilliant mystery-comedy by Alfred Hitchcock. While working on this film he received a cable from David O. Selznick asking him to come to Hollywood. In America he wows ’em and the quality of his work improves tremendously, and he earns his reputation as one of the truly great filmmakers. This film needs no excuses because it was made in England, it’s still one of the master of suspense’s best though not quite as polished as his later American works.

The Lady Vanishes is Hitchcock at his freshest and lightest, as he spoons out a mouth-watering mystery and spy adventure tale to go along with the snappy dialogue and screwball romantic-comedy antics. It was adapted from Ethel Lina White’s novel The Wheel Spins, and screenwriters Sidney Gilliat and Frank Launder provide a witty script.

The film opens in an over-crowded Tyrol alpine hotel on the brink of England entering WW11, where a bunch of English citizens are stranded and anxious to get home for various reasons. Cricket fanciers Caldicott and Charters are anxious to get a room and leave this dreadful country to return in time for the Test Match. The weasel-like hotel manager tells them they must share the maid Anna’s room because there are no other vacancies, which embarrasses the prudish chaps who leave the room when she undresses in front of them without any shame. The buoyant and attractive and spoiled English socialite, Iris Henderson, sweeps into the hotel accompanied by her two girlfriends here on a ski holiday, and is treated by the manager like royalty and is given the hotel’s most elegant room. Iris must return by train tomorrow to be back in time for her wedding in London, to a man she already knows she doesn’t love but has decided she’s done everything she wants and it’s time to settle down. Margaret and Eric Todhunter are also English and are stranded at the hotel, waiting anxiously to return home. They really are not a married couple, but are on a romantic vacation posing as a honeymoon couple to have an adulterous affair. They have deceived their spouses into thinking they are traveling with family members. Eric is a lawyer, who promised his lady friend that he will divorce his wife after this trip. But the cad now has a change of mind, as he pines more for getting a judgeship than anything else and fears if he’s recognized there could be a scandal to ruin his chances. A seemingly harmless and eccentric old English lady, bespectacled and dressed in tweed, Ms. Froy, is seated at the same dinner table as the cricket chaps and tells them she loves this musical country and has been here for six years working as a governess, but now that her charges have grown up she’s returning by train tomorrow to England.

Meanwhile Iris can’t sleep because of the racket coming from the floor above. Gilbert Redman has some of the locals dancing to the ancient peasant folk tunes of central Europe, as he accompanies them on the clarinet. He refuses to stop, saying he’s writing a book about folk culture. When bounced from his room he enters Iris’ room and refuses to leave until she relents, rather than cause a scandal she gets the manager to give him back his room.

Ms. Froy is standing out in the balcony listening to a Tyrolean street singer, when he’s strangled to death and she seems to take no notice but continues to hum the tune he was singing before struck down. The next morning she joins Iris to catch the trans-European express train, but while bending down to get her luggage a flowerpot aimed for her from a second floor windowsill instead grazes Iris on the head making her dazed. Iris after some tea with Froy on the train, nods out and when awakened she can’t locate the lady in tweed again. When she asks about her, the stewards and the passengers for various reasons lie and say there was no such lady in tweed. The stern baroness and always malevolently smiling Signor Doppo, an Italian magician with a circus act called The Vanishing Lady, who shared the same compartment, deny ever seeing the old lady. The daffy British cricket nuts lie because they’re afraid Iris will stop the train for a search and delay getting home in time for the Test Match. Eric lies because he doesn’t want his name involved in what could be a messy situation. An oily brain surgeon from Prague named Dr. Hartz, seems too willing to help but he goes out of the way to question her ability to think straight because of the slight concussion and is instead leading her away from ever finding Froy. Hartz assists as a critically injured patient boards in a stretcher at the next stop while fully bandaged, and is awaiting surgery by him at the hospital on the next stop. The patient is nursed by a nun dressed in high heels, which arouses suspicion.

The only one really willing to help is Gilbert, and Iris has no choice but to get better acquainted with the man she took an instant dislike to. In their snooping around, Iris and Gilbert become convinced that the old lady is in danger and that she’s still aboard.

The mystery is suspenseful as the tension builds, as it’s unclear what the strangled Tyrolean singer has to do with Froy. The comedy is continuous thanks to the droll English humor dished out by Naunton Wayne and Basil Radford as insensitive buffoons. The coy romance between Margaret Lockwood and Michael Redgrave was winningly whimsical. Though everything about this tale was implausible, who cared since it was so diverting. The train ride was bumpy, but in the hands of Hitchcock it was made smooth in a most disarming way.

Hitchcock was named Best Director by the New York Film Critics Circle, one of only a few such awards accorded this film. But it grew in popularity, whereas it now has become slightly overrated. 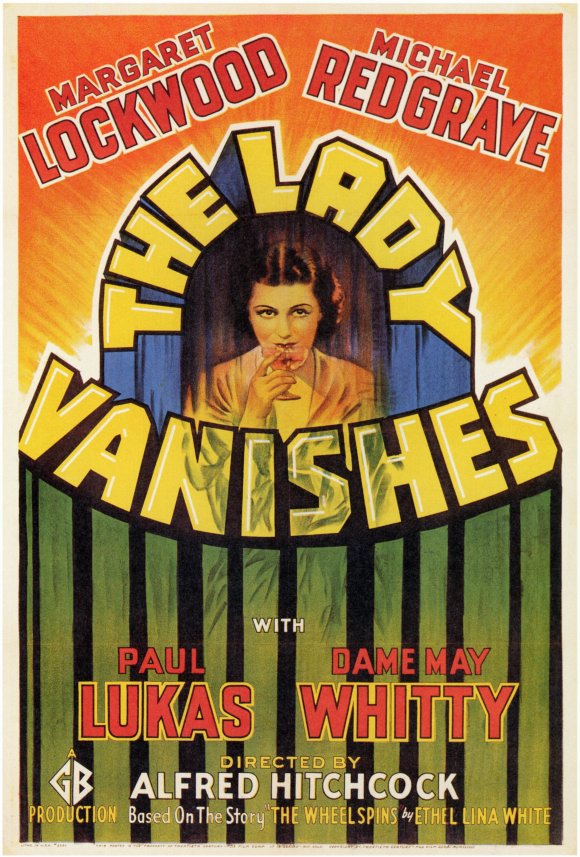