The last of the comedies produced by the Ealing Studios, who before the year was over sold out to the BBC. It’s a brisk heist pic shot in lush Technicolor, with a droll black humor. Director Alexander MacKendrick (“Sweet Smell of Success”/”Whisky Galore!”/”The Man in the White Suit”), raised in Glasgow but born in Boston, is at the top of his game directing, and adeptly uses the clever story by William Rose, an American who relocated in Canada, to keep things delightfully foolish. Rose’s plot line and characters are deliciously off-beat, and the ensemble cast are all finely in tune for their hilarious roles in this bizarre bungled caper.

Alec Guinness wears false teeth as he disappears into his role of the crazed Professor Marcus (looking much like Alastair Sim), the sinister over-polite mastermind who schemes an elaborate robbery of a London armored bank van. Posing as a music professor, the Professor rents two upstairs rooms in the Victorian house near St Pancras Station of the lonely, doddering elderly widow Mrs. Wilberforce (Katie Johnson). Mrs. W. is a frequent visitor to the local police station, who kindly treat the well-meaning pest as someone they believe lives in a fantasy world and is harmless–someone who could have been their mother.

The Professor invites over his four other crime partners, the youthful teddy boy punk Harry Robinson (Peter Sellers), the homicidal Louis Harvey (Herbert Lom), the oily confidence man Maj. Courteney (Cecil Parker) and the simple-minded oafish One-Round (Danny Green), telling the trusting landlady they are an amateur string group who are rehearsing. The boys fake playing the classics, as a phonograph subs for them.

They successfully pull off the daring daylight heist of £60,000and store the loot in a huge trunk at a locker at St Pancras Station, where they get the unsuspecting Mrs. W. to go through police security to bring the trunk back to their flat in a taxi. But they bungle things before they can make a clean escape as through their own stupidity, greed and inability to kill the busybody old lady (who catches on at last that she’s hosting robbers), they end up squabbling amongst themselves until their problems are literally eliminated one by one.

Always witty but never fully believable (it takes a lot of crafty writing and smart acting to make the flawed plot line so workable), The Ladykillers take serious matters like robbery and murder and makes them funny (which is no easy trick, but when done right makes for great comedy!). 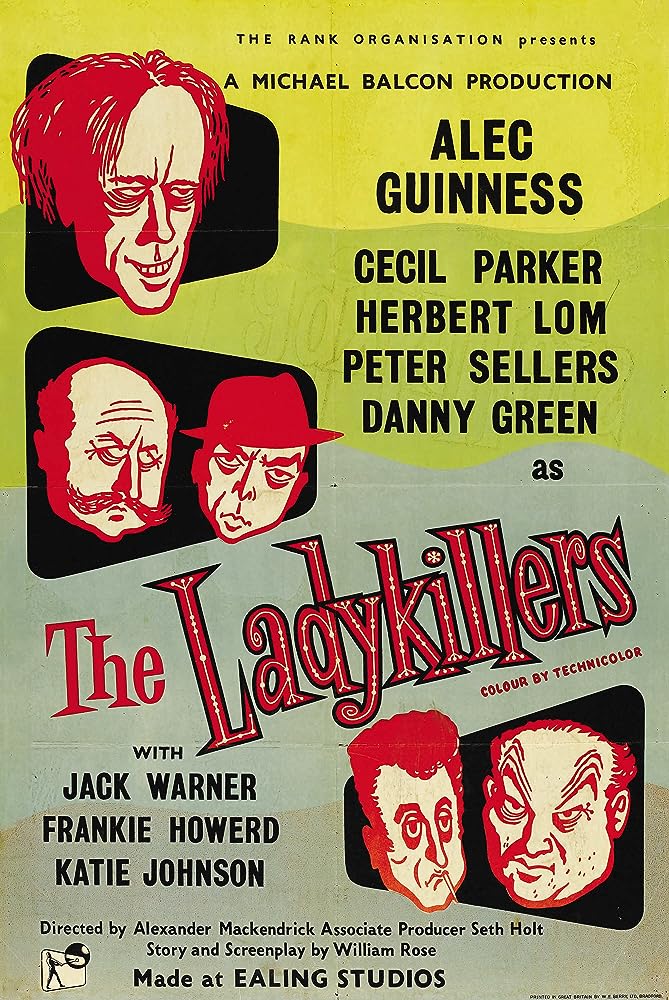