One of the better sci-fi’ers to emerge from the 1950s. This one is about ants that have become mutants because of the radiation from A-bomb tests in 1945, in White Sands, New Mexico. They have reached giant proportions between 8-to-20-feet and are attacking people at night; during the day the bright light and intense heat bothers them, so they remain in their nest.

The only part of the film that is in color, is the red letters of the title. The action starts off in melodramatic form as a traumatized five year old girl (Sandy Descher) is picked up by Sergeant Ben Peterson (Whitmore) and Officer Ed Blackburn (Drake), as she is walking in the desert. Soon they discover the smashed trailer with the girl’s dead parents and unusual footprints around it that no one can determine. No money is taken, only sugar. Go figure the ants did this! So you can’t blame Sgt. Peterson for leaving his state highway partner Blackburn to watch the general store that was destroyed as he stays with Gramp’s murdered body, while he goes back to interview the girl who is too petrified to speak. He hopes to get her to tell him what happened. The ants do their thing with the officer, as soon as Peterson leaves him. This lays a guilt trip on the sergeant, even though his precinct captain tells him he followed procedures and did the right thing.

Since the girl’s father was an F.B.I. agent, who was on vacation, this makes it a federal crime and the F.B.I. is called in to investigate in the person of, Bob Graham (James Arness).

When Graham sends the footprint to the F.B.I. lab, they send them father-and-daughter entomologists Dr. Harold Medford (Edmund Gwenn) and Dr. Patricia Medford (Joan Weldon). She departs from the plane showing us her pretty calves as she comes down the ladder, this is enough for her to get agent Graham’s attention for the remainder of the film. Now Dr. Medford is a real ornery character, in a rush to get started in investigating his theory to the cause of the deaths. But first they revive the comatose girl with a concoction of formic acid as she awakens startled and frightened out of her wits yelling, “It’s THEM!”

The cops and scientists go back to the desert at night and are greeted by a sand storm, as Pat is attacked by one of the giant ants. We hear the frightening cricketlike sounds they make, which is the language they use to communicate with each other. Dr. Medford directs the cops to kill the ant by destroying its antenna, thereby it can’t see and loses control. He also tells them we got a national crisis on our hands, as Air Force General O’Brien (Onslow) enters the crime scene. Dr. Medford tells him that this has to be kept top secret or else there will be a panic in the country.

What ensues is a story relating both to a biblical prophesy (the world will be destroyed) and to a science gone amok (radiation will destroy the world).

Under Dr. Medford’s direction the ant’s nest is spotted and bombed with cyanide and sprayed with flame throwers, but two queen ants escape and fly off undetected as Dr. Medford explains that this could be the end of mankind if these ants are not destroyed immediately. They could give birth to thousands of ants and their strength is 20 times their weight, which means they could lift a ton; also, they are very dangerous because they are the only animals other than man who are capable of making war.

One queen ant is spotted by a pilot (Fess Parker) in Texas, who thinks he saw a UFO in the form of a giant ant flying; but, he is locked up in a mental ward so the secret could be kept from the public. Soon one of the queen ants attacks a naval ship and is destroyed, which leaves only one remaining.

A patient (Olin Howland) in an asylum comically informs the military people questioning him that he saw a giant ant entering the Los Angeles sewer system. He keeps saying the following refrain: “make me a sergeant and give me the booze!” It is these constant little touches throughout, more so than the special effects, that make this film lively.

Them! ends in fast-paced action after hitting a long stretch of tedium. The public is finally alerted to the dangers and the Army goes into the Los Angeles sewers to get the queen ant. By now, 2 months has elapsed since the first ants were spotted and there are scores of other ants in the sewers. The only catch to the Army attacking them is that two little boys are in there and it becomes a moral dilemma whether they should lose their lives for the greater concern of the masses. It is decided that Sergeant Peterson should go in first and try to rescue the children. Heroically Peterson gives up his life to get the kids to safety, as an ant crushes him.

This film was intelligently presented, the special effects were effective, and the cast all provided fine performances — especially Edmund Gwenn. 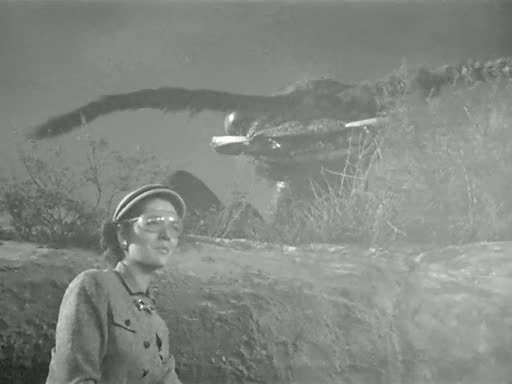