“This watchable neo-noir tale is all style and not much on substance.”

This watchable neo-noir tale is all style and not much on substance. The intense acting and the quirky dialogue, plus the numerous plot twists and the penetrating character study enable the film to be entertaining in a nuanced way. It is also interesting to note that the film pays homage to great mystery writers such as Graham Greene, Ernest Hemingway, and Malcolm Lowry.

Walter (Eric Roberts) wakes up in a shack in Santiago, Mexico, disheveled and seemingly on his last legs as he stumbles out along the dusty streets, rushing to a cantina to get drunk on cerveza. He tells us that he was engaged to a girl back east who worked in the same office as he did but he dumped her and left his useless job because he wants to be a writer; even if he has never written anything, only sending imaginary letters to his now jilted girlfriend telling her how sour his life turned out since leaving her. He has been here for two weeks, speaking to no one after being robbed of his traveler’s checks. In the bar he is greeted by a fellow gringo, a stranger called Louis (Jim McManus), who starts making friendly conversation with him, trying to find out who he is and why he is here.

Louis tells him that he’s an epigram writer and gets Walter to tell him a fantasy story that he’s in Mexico to hide out after killing a man. Walter thinks that this will impress Louis. Louis then tells him that he is just the man he is looking for, as he has a rich client whose 16-year-old son was killed by a homosexual rapist and that the killer is a very wealthy man who got away with the crime. He then offers Walter $100,000 to kill the rapist murderer.

Walter testily asks about the one hiring him and is told he is a philanthropist, Jose Guerra (Joaquim de Almeida), who donated money to build a much needed children’s hospital in town. Walter seems to be put off by him, recalling that he sees him in town wearing Armani suits. Louis responds with an epigram: “It is not the clothes, but the man’s tears that make the man.”

Needing the money, Walter takes the assignment and goes to the so-called killer’s unguarded house, where he suspiciously lives alone without security. When he pulls his gun on Humberto (Victor), the unafraid victim says ” If you were worth the money they paid you, I would be dead five minutes ago, go ahead–do what you came for.” When Walter can’t kill him and is intent on listening to his story Humberto tells him what really happened, how Jose killed his own son because he was a queer and couldn’t live with that. After getting Walter’s attention by telling him he knows Graham Greene he wrestles the gun away from him and instead of killing Walter he kills himself, saying he is tired of waiting for someone to come and kill him.

The story moves along the lines of betrayal and revenge, and Walter lies crippled in a hospital after his employee finds he doesn’t need him anymore. Walter’s self-pity turns to an appreciation of the cockroach crawling on his face and he imagines himself becoming like the roach, reasoning the roach has always survived since the beginning of time even if he’s useless and by eating him he is taking in the same poison that keeps the roach alive.

Walter will eventually meet the pretty 17-year-old girl Lourdes (Tara Crespo), who is about to marry Jose. Lourdes is the same girl Walter lusts after from his Peeping Tom experiences in town. Walter used to peek into her house and pine for her in his two week downtrodden binge, and he will meet her again as he seeks revenge on Jose for double-crossing him.

The film works best as a hard-boiled character study where Eric Roberts makes it believable that someone could end up in such an untenable position, yet survive because he has the instincts for survival no matter how bad it gets. It’s an offbeat noir film with the macho elements to its story relating to mystery writers who get drunk and write scripts that have their flawed protagonist put their ladies on pedestals, only to delight in watching them fall off. 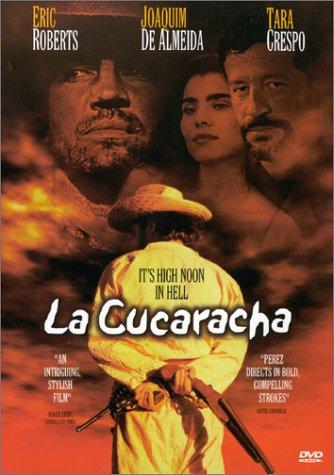