“Gives the viewer a pleasant taste for the Yiddish theater.”

Arnon Goldfinger (“The Benny Zinger Show”) directs and Oshra Schwartz pens a pleasantly straightforward documentary on the life and career of the late Yiddish actor Pesach’ke Burstein and his family, wife Lillian Lux and twins Michael and Susan. They are remembered as a legendary Yiddish theatrical family, as the documentary looks back with fond memories on the rich tradition of their experience in the Jewish theater. Their bittersweet tale oozes with nostalgia for the early days of the 20th century, the glory days of Yiddish theater, when Manhattan’s Second Avenue alone had five Jewish theaters to cater to the large and eager crowds anxious to hear the colorful jargon of their eastern European roots again.

Pesach’ke Burstein was born in a small Jewish town in Poland in 1896 and died in NYC in 1986. His name means Passover, as he was born and oddly enough died on Passover. At an early age he was drawn to the profession of komediant (actor), which met with disapproval from his Orthodox Jewish father who viewed the acting profession with disdain. This led the 15-year-old Pesach’ke to runaway with a traveling Jewish theater troupe. He was never to see his parents again, as they died a few years later in a pogrom. In 1924 through a break from Yiddish theatrical impresario Boris Thomashefsky, Pesach’ke was brought to New York City and played in the flourishing Yiddish theaters on the Lower East Side. Pesach’ke was a talented comic actor and singer and could whistle like a bird, and was soon recording two to three records a week for Columbia–including the Yiddish version of “Sonny Boy”and the memorable “Odessa Mama.” He met the 16-year-old ingenue Lillian Lux on the stage in 1937 and they formed a partnership that required touring many South American countries. Pesach’ke married the girl he was senior to by 22 years while on tour in 1939. Their last stop was in Poland, where they fled on the last cruise liner out before the Nazis invaded and closed off the exits as WW11 began.

After the war they became parents of twins. By the age of seven the twins became part of the show and were given stage names of Motele and Zisele. Susan was a talented ventriloquist but never felt completely comfortable in show business, and at age 18 quit to marry and live in a comfortable dream house with an older man. Michael, billed himself as Mike Burstyn, also left the family and achieved solo success in Israeli musical films and later built a career in the American theater (established stardom in Broadway’s “Barnum” and Hollywood’s “Kuni Lemi”), as he did not wish to remain limited only to Yiddish theater.

Goldfinger uses archival footage (from a return visit to the desecrated ruins of a Catskills hotel to clips of the family’s stay in Israel), home movies, old photographs and recordings to give the viewer a whiff of the Yiddish experience. The filmmaker also shows us clips from Pesach’ke’s biggest hit show “A Village Wedding.” Lillian narrates as if it were a Yiddish radio broadcast and the twins in separate interviews fill us in on the details of their absorbing stage life, often with a different slant from their mother on how things happened. Much of the film has to do with the travails of being a traveling showbiz family always living in hotels and strange countries and dependent on the up and down turns of the theater, as the crowds for Yiddish theater began to dwindle in the 1950s. There are tears shed and laughter shared, but there was always an exuberance in the telling of the story even over their disappointments (one being that the Israeli government encouraged Hebrew to be spoken and frowned upon Yiddish as a curse from the Diaspora and Israeli Zionists smashed windows at their show to enforce Hebrew as the sole language in the newborn country).

It’s a haimish film that gives the viewer a pleasant taste for the Yiddish theater, but doesn’t completely make its case for the greatness of Pesach’ke Burstein or clear up his enigmatic character. It saves its most powerful shot for last, as the camera lingers on the entrance to the Yiddish Theatrical Alliance’s cemetery and while panning over the field of monuments that signify the death of an entire way of life Lillian sadly comments: “This is the Yiddish theater.” 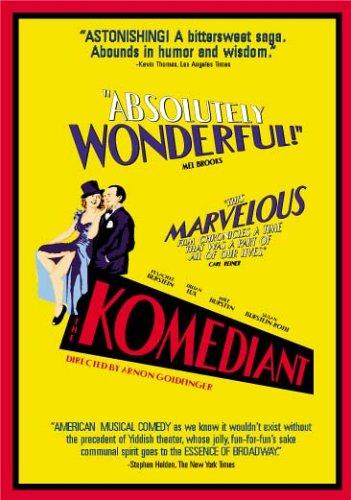