“One of the truly great Westerns, directed and acted with flawless skill in the old style.”

This was the first of 8 films Jimmy Stewart and Anthony Mann worked on together, and one of the most inspired they ever did. Fritz Lang was slated to direct this A-film Western but turned it down and Stewart recommended B-film director Mann, who had directed earlier such low-budget film noir classics as T-Men, Desperate and Raw Deal–works that Stewart liked very much. Universal-International couldn’t afford to pay Stewart’s big salary and offered him a small salary but a percentage of the film. That turned out to be a great deal for the actor, as this film made him a very wealthy man and changed the way the stars were paid forever.

This is a no-nonsense revenge film. Lin McAdam (James Stewart) chases down his bank robber brother who has taken the name Dutch Henry Brown (Stephen McNally) after shooting their father in the back for refusing to hide him. Lin and best friend High-Spade (Millard Mitchell) run into Dutch Henry in Dodge City during a marksmanship event for the “One of a Thousand” perfect Winchester model rifle 1873, the prize offered to celebrate the town’s centennial. The Winchester is known as the gun that won the West. Marshal Wyatt Earp (Will Geer, he would later play on TV Grandpa Walton) tosses the coin that Lin hits as a bull’s-eye to win the contest, as the brothers were taught by their dad to be excellent shots. When Lin wins the rifle his brother and two henchmen steal it from him but ride out of town without guns and bullets, as Earp has enforced a no guns in town policy and Dutch is in too much of a hurry to pick up his guns. When Dutch comes to Riker’s bar in the desert, he gets hustled into a card game by slimy Indian trader Joe Lamont (John McIntire) and is forced to sell the rifle to buy guns to continue on to Tascosa where he’s to join up with dangerous gunman Waco Johnny Dean (Dan Duryea) to rob the bank. Lamont doesn’t fare too well when selling guns to Young Bull (Rock Hudson), as the chief takes the priceless rifle and goes on the warpath. Dancehall gal Lola (Shelly Winters) and her cowardly boyfriend Steve Miller (Charles Drake), who left her in the middle of an Indian attack only to return at the last moment, flee from the attacking Indians to take shelter with an encircled cavalry platoon led by Sgt. Wilkes (Jay C. Flippen), who are waiting for reinforcements from the nearby fort while stranded on the trail. They are soon joined by Lin and High-Spade, who are pursuing Dutch Henry when they spot the Indians. After repelling the frenzied Indian attack and killing the chief, a trooper (Tony Curtis) finds the priceless Winchester and the sergeant gives it to Steve because Lin has already left. Steve rides to Tascosa to meet Waco Johnny to get in on that bank robbery deal, while Waco shows up sooner than expected as he’s being chased by Marshal Noonan and arrives at the Jameson boarding house. Eying the rifle, the pathological Waco kills Steve when he refuses to sell it to him. In the shootout with the marshal and the posse, Waco escapes with Lola after his gang is wiped out. He then meets Dutch Henry in the secluded shack as arranged. Dutch Henry recognizes the rifle and takes it away from Waco. On the day of the bank robbery, Lin and High-Spade arrive. When Waco tries to draw on Lin, he’s shot down as Lola warned him previously to watch out for his left hand. The robbery is botched, as Lin guns down his brother’s gang and then his brother in a glorious shootout on a mountain top where they trash talk to each other in psychological jargon that bears the stings of their longtime animosity. In the end, Lin gets even with his evil brother, retrieves the priceless rifle and gets the dancehall gal with a heart of gold.

This neurotic actioner, shot in black-and-white, has a bold poetical visual language and makes excellent use of the jagged landscape to frame its bitter Oedipal story. One of the truly great Westerns, directed and acted with flawless skill in the old style. Stewart reaches for his dark side and comes up with an amazingly driven performance, while Duryea is at his sleaziest best. 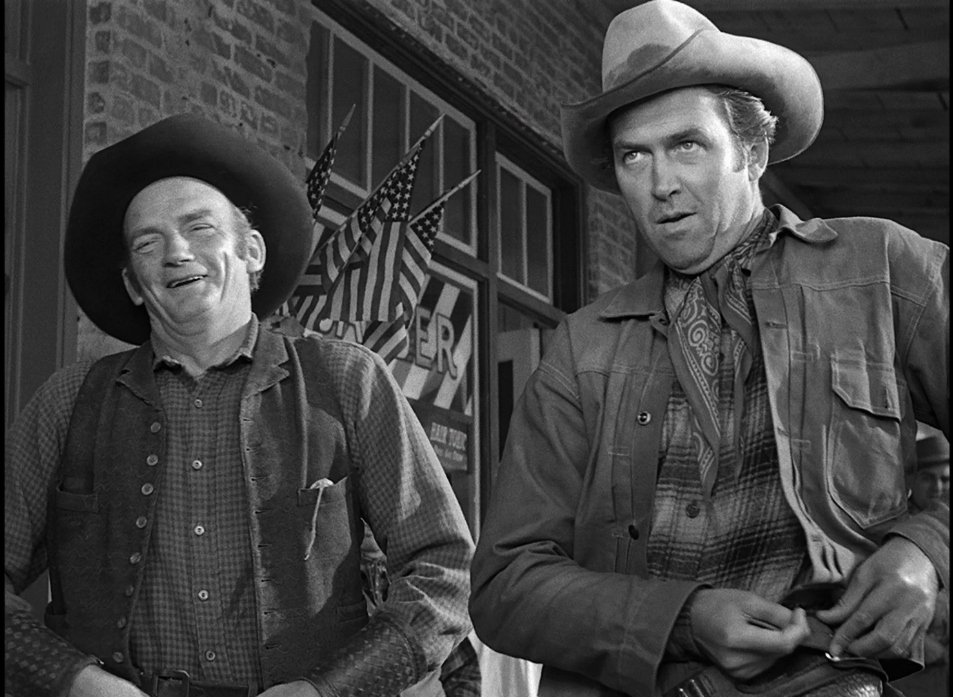