KNOCK ON ANY DOOR

“Though Ray’s film has a strong sense of social and moral outrage, the narrative doesn’t bear out the simplistic conclusions arrived at.”

It’s the first production by Bogart’s Santana company. Nicholas Ray’s (“They Live By Night”) Knock On Any Door is a combination ‘social problem’ drama and crime film, that problematically suggests that it’s society’s fault why the guilty party the big time lawyer Andrew Morton (Humphrey Bogart) represents, the maladjusted handsome youth Nick ‘Pretty Boy’ Romano (John Derek, in his film debut, later known as the hubby of Bo), began a life of crime leading to the murder of a cop. It all boils down to Nick’s innocent grocer father sent to jail due to a travesty in justice, living in a slum, meeting wrong companions, living in poverty, receiving foul treatment in reform school, and being from a disadvantaged family. The simplistic defense to the jury seemed not only disingenuous but a worse case of ‘bleeding heart liberalism’ imaginable. It’s adapted from Willard Motley’s novel by writers John Monks, Jr. and Daniel Taradash.

Career criminal Nick ‘Pretty Boy’ Romano is picked up for the bar robbery and the cold-blooded killing in an alley of Officer Hawkins. Successful lawyer Andrew Morton, himself a refugee from the same slum, reluctantly takes the case on the urgings of his social worker wife and because he has a long guilt-ridden history with the Romano boy and his immigrant Italian family. The lawyer believes his client’s claim of innocence, and at the trial reveals Nick’s checkered past and his hatred toward an unfair society which led to his life of crime. Nick’s credo–“Live fast, die young, and leave a good-looking corpse”–is the narcissistic youth’s message for his generation, which contradicts the film’s sober liberal message over disenfranchised youth.

Andrew turned his back on the kid when he failed to reform as promised and returned to a life of robbery. Things seemed to change for the better when Nick married neighborhood nice girl Emma (Allene Roberts), and tried to hold down a legit job. Unable to stay employed, Nick’s attempt at redemption came to a sudden end and he returned to a life of crime and gambling. The deserted pregnant Emma committed suicide. Filled with inner pain and guilt over her death, Nick in an insane rage committed the stickup and subsequent cop killing. During the trial Andrew is winning the case by having Nick’s friends Sunshine and Butch provide an air-tight alibi and while under cross-examination the lawyer breaks down the testimony of the victimized bartender. But the unrelenting DA (George Macready) under harsh questioning gets Nick to confess. Nick’s sentence to death despite Andrew’s long-winded smugly passionate plea for mercy.

Though Ray’s film has a strong sense of social and moral outrage, the narrative doesn’t bear out the simplistic conclusions arrived at. There’s a complexity missing that makes this plea for justice ring hollow with meaningless social points, and the anguish for the unfortunate characters seem misplaced. 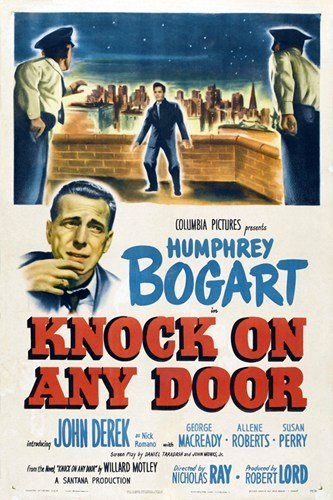