“A muddled b/w drama, attempting vainly to be film noir.”

A muddled b/w drama, attempting vainly to be film noir, is based on a novel by Margaret Echard and written by Lenore Coffee. It’s a by the numbers directed effort by King Vidor (“Ruby Gentry”/”War and Peace”).

It generates little tension and interest. Though the Southwestern desert spots are visually sound. For health reasons a struggling stage actress from NYC, Shelley Carnes (Ruth Roman), in need of rest, takes a vacation on a dude ranch in Texas run by Liza McStringer (Mercedes McCambridge). On her way to the ranch Shelley by accident meets the wealthy Richard Trevelyan (Richard Todd), who through a split jury beats an execution for murdering his wife. The public thinks he got away with murder. Shelley swears to his innocence and they soon marry.Liza McStringer, who served on the jury and argued for his acquittal, after the verdict reveals that the wife got what she deserved. On the wedding night Shelley faces danger from the same person who killed Richard’s wife, and we’re left wondering who was the killer.Mercedes McCambridge is fine as the woman scorned, while Zachary Scott is typecast as the lazy playboy. 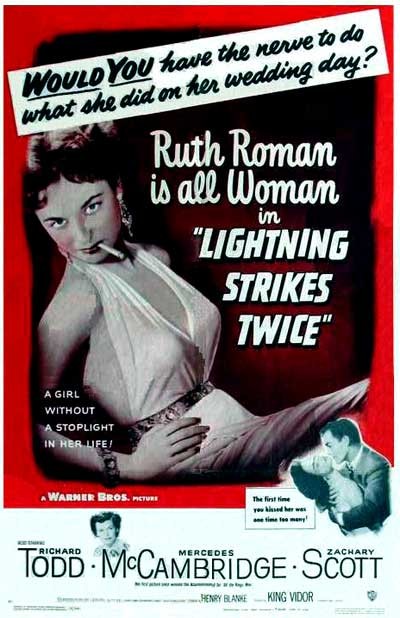