“An awful remake of George Cukor’s witty 1939 The Women.”

An awful remake of George Cukor’s witty 1939 “The Women” that starred Norma Shearer, Joan Crawford, Paulette Goddard and Rosalind Russell. It’s glossier and the satire is softer; it also adds Cinemascope, music and men, but to no avail. The songs are forgettable, with only “Young Man With A Horn” (sung by June Allyson with Harry James) being bearable. David Miller does a workmanlike job directing a film based on Clare Boothe Luce’s vitriolic play “The Women.” The script by Fay and Michael Kanin drains all the vinegar out of Luce’s play, just keeping it bitchy and witless.

Kay Hilliard (June Allyson) is a former nightclub singer, married ten years and mother of a young daughter, who learns her Broadway producer hubby Steve Hilliard (Leslie Nielsen) is seeing the ambitious sexy chorine Crystal Allen (Joan Collins). When a vile manicurist in a fancy 5th Avenue hairdressing salon drops the gossip of Steven’s philandering to customer Sylvia Fowler (Dolores Gray), she lets it get back to Kay through the socialite set that they both belong to. Sylvia’s filthy rich hubby backs Steven’s plays.

The miffed Kay shoots for a divorce, but then decides to win hubby back by being as foxy as Crystal. As expected, her wily feminine moves work.

The film is of value only because it descended into camp and there’s probably an audience for that. But I found it unfortunate it took a marvelous comedy and made it into a film that can be enjoyed mostly for its colorful costumes and the catty acting from its fine supporting cast. 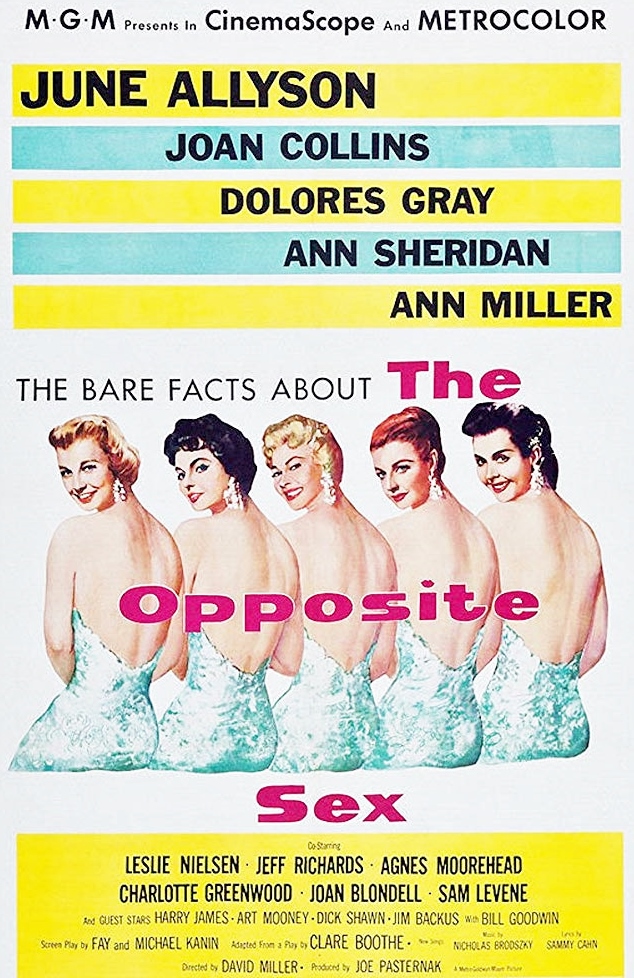