KING RICHARD AND THE CRUSADERS

“Enjoyable as a fluff pic on the Third Crusade.”

Warner Brothers’ first CinemaScope film is an adaptation of Sir Walter Scott’s 1825 classic The Talisman. Though the actors are mostly miscast and give hammy performances, the visuals offer delicious spectacles and the costumes are colorful. Overall it’s enjoyable as a fluff pic on the Third Crusade, set in 1191, as European kings (from France and Austria) are under the leadership of England’s King Richard I (George Sanders) as they try to obtain the Holy Grail and regain Palestine from the Moslem Saracens under the leadership of the Sultan Saladin (Rex Harrison).

It’s not as bad as first thought by early reviewers and to its credit shows tolerance to the Moslem characters, something not done regularly at that time in a Hollywood that tended to stereotype the Arabs as villains without souls. Too bad it loses much in drama because it has some risible unintentional kitsch moments due to the inadequate script by John Twist, such as when the attractive fictional character, Lady Edith Plantagenet played by Virginia Mayo, tells her cousin, King Richard the Lionhearted: “Oh, fight, fight, fight! That’s all you ever think of, Dickie Plantagenet!” Middling studio director David Butler (“The Littlest Rebel”/”Pigskin Parade”/”Road to Morocco”) directs in an uninspiring way, as if this was a comic strip version of Scott’s book. But Butler gets the fight scenes right.

The battle against Saladin takes a new turn when Richard, in his tent, gets hit with a poisoned Saracen arrow shot by an unseen Christian bowman assassin, as there’s bickering on the Christian front as to who is to lead the charge. When Saladin, depicted here as a wise warrior with yearnings for peace, hears about Richard’s life threatening injury he sends his personal healer to nurse the king back to health, and that physician, actually Saladin himself under an assumed name, works his cure using the magical talisman on the condition that the two rulers will later settle the long-standing struggle over the Holy Land in a joust between them.

Meanwhile the film’s hero, the brave Scot-man knight, Sir Kenneth of the Leopard (Laurence Harvey), has a devil of a time trying to convince the King that he’s a loyal subject willing to lay down his life for him not for patriotic reasons but because he respects the King’s legendary deeds, while the King favors Sir Giles Amaury (Robert Douglas) and his wormy Piedmont adviser, the Marquis of Montferrat (Michael Pate). Sir Giles is the power-hungry field general plotting to eliminate Richard and take command of the Crusaders, and is willing to take risks to satisfy his desires for power and glory. There’s also a romance between Lady Edith and Sir Kenneth, that is put on hold as they have to deal with Saladin’s marriage proposal to Edith which he claims will bring peace by unifying Christian and Moslem.

Aside from Harrison’s pleasing playful performance, everything else about this vulgarian version of Scott’s noted romantic novel seemed stilted, overbaked and inaccurate historically. 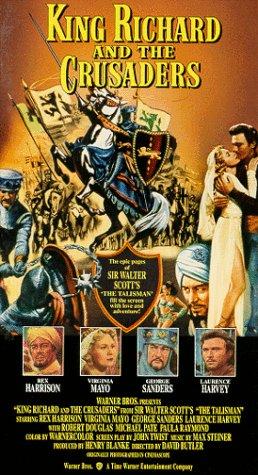