Kevin Costner directs and stars in a western filled with clichés, homilies and an inability to end without making cornbread out of a romance that seemed forced in the first place. Overlong and pumped with self-importance, Costner can’t energize the familiar plotline. He uses the old line of battle between the good cowboys and the evil rancher to create his traditional western. There is no gray in the middle or much to ponder, pardner. What Open Range has going for it are a classy performance by Robert Duvall, who makes the best of the bad hand he was dealt, and an exciting action-packed shootout near the end that conforms to the genre’s formula. The film should have ended at the shootout instead of tacking on another 10 or 15 minute with its anti-climactic love story. But since so few westerns are currently cranked out, this old-fashioned B movie should tempt those who have a hankering to ride the open range with a dying breed of cowpokes in the west of 1882. It is penned by Craig Storper from a novel by Lauran Paine.

Boss Spearman (Duvall), Charley Waite (Costner), Mose Harrison (Benrubi) and “Button” (Luna) free graze their cattle across the western prairies, talk in clichés, and hunker down under a tent top when a rainstorm hits. Boss is the gruff leader of this ragtag outfit and Charley has been riding with him for the last 10 years, becoming his loyal second in command. He has overcome his troubled violent past with the help of the common sense wisdom and fairness dished out by the earthy cowboy philosophy spun by Boss. Though Charley is still ashamed of his past deeds, the taciturn man refuses to open up about what he did. The 30-year-old Mose is grateful to Charley for recommending him to Boss, who was undecided about hiring him because he was overweight and thought that he might eat too much. Buttons is a Spaniard drifter, rescued from a dissolute town life. The 16-year-old found a home and security and ethical values as a cowboy with role models to look up to. The free grazers do a male bonding thing and relish that despite their flaws they’re all good guys.

When Mose is sent to the nearest town to bring back supplies, he doesn’t return. Boss and Charley find him jailed and beaten by the corrupt Sheriff Poole under orders from his evil boss, the wealthy rancher with the wicked Irish brogue, Denton Baxter (Gambon). Baxter makes it clear he doesn’t like free grazers and plans to kill them and take their herd. Before the cowboys return to their home on the range, they have Mose repaired by Doctor Barlow. Charlie eyeballs the Doc’s not so young any more maiden sister Sue (Bening), and doesn’t make a move on her since he mistakenly thinks she’s his wife.

When the evil rancher sends his henchmen after the cowpokes the bad guys are beaten by Charley and Boss before they can jump them, but the junior members of the outfit left guarding the wagon meet with harm from the other hired hands of Baxter. The injured party is rushed to Doc’s by the two veteran cowboys, while the other is buried. In town, a romance begins to bloom between Charley and Sue while the stage is setup for the big showdown fight between the two brave cowboys against the bad rancher and all his minions. It’s all predictable rehashed stuff from many westerns. The locals are too scared of the controlling Baxter to fight back but when Charley rescues a local businessman’s pooch in a flooded street, the townies decide to get up the nerve to help their fellow good guys.

The sudsy puritanical romance showed no chemistry between the lovers and of all the unbearable scenes, this was the one that really stunk to high hell. Open Range just never could do anything fresh or stop reducing everything to terms of black-and-white, or fade from a shot in time without lingering too long after it made its point.

It can be compared to Clint Eastwood’s Unforgiven for its revenge theme and the way it captured the beautiful western landscape, but it’s not in that special class of magical moviemaking. Maybe “they broke the mold” after that 1992 classic (just kidding!). Costner’s heavy-handed finger prints are all over these four cowboy characterizations and all their wholesome purity begins to sound like so many cows mooing. It’s all too simplistic and the good guys are too incredibly decent to swallow whole without at least several nightcaps and a gun pointed to your head. 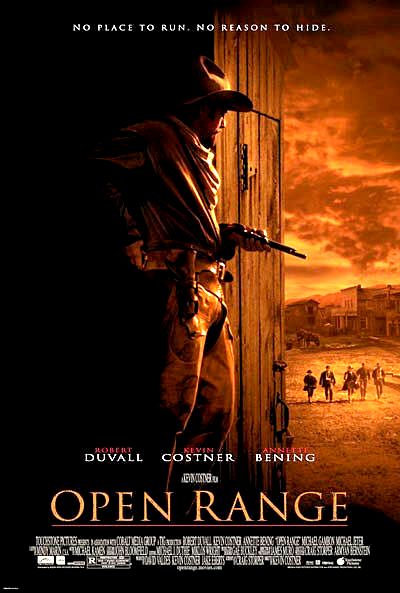 ROCCO AND HIS BROTHERS