“About as subtle as a brick thrown through a bank window.”

Directed by Michael Polish (“Twin Falls Idaho”/”Jackpot”/”Northfork”) as if it were a dumb Disney family value adventure sitcom with absolutely no edge despite labeling the government the bad guys (due to the unlimited powers of the Patriot Act). Brother Mark cowrites the lame script with Michael. The brothers in their fourth film are now operating on a big-budget and make their feel-good story about a little-guy dreamer as corny as any screenplay turned out by Hollywood. It’s about as subtle as a brick thrown through a bank window. The message sent loud and clear is that it takes a determined dreamer to succeed; it warns that once you start following your dreams you shouldn’t give up even if it might mean in this case loss of life, loss of family, loss of home, loss of sanity and forcing your kids to become truants (speaking about family values!). If you do quit, you will always wonder what your children will think of you. I might add this is not a dream to make the world a better place but merely an egotistical dream to fulfill a personal wish. This premise has serviced scores of pics with the same schmaltzy underdog theme and some have come out smelling like a rose. But this Capra-esque venture flubs its toe and comes out smelling of rocket fuel and bad mythologizing. After getting off to a rocket fast start it slows down for an overlong dullish middle and wings its way to an unbearably contrived finale success story that left me cringing in dismay. All the characters are cardboard stereotypes divided into bad guys vs. good guys, with no room in-between for any other shades.

Good guy Billy Bob Thornton plays middle-aged devoted family man Texas rancher Charles Farmer, a former Air Force pilot who washed-out as an NASA astronaut over his father’s suicide when he was forced to return home to manage the ranch and is still haunted by the suicide and not fulfilling his dreams to be an astronaut. His loyal waitress wife Audie (Virginia Madsen) and their two precocious little children (Polish’s children) and his steadfast high school student son Shepard (Max Thieriot) feed into his dreams and help him build a rocket in the barn modeled after the Atlas rocket. The wannabe astronaut pumps so much money into the space orbit venture that he’s about to lose his 300+ acre ranch to the bank on a foreclosure.

When Farmer’s about to launch, hoping to make a solo orbit of the Earth, word gets out and he becomes the subject of an FBI investigation. The government suits pull out all stops to halt this unauthorized launch and little-guy Farmer grits his teeth and battles them with his small-town little-guy lawyer (Tim Blake Nelson).

The film never lifts off even though its rocket eventually does, after first crashing and then being rebuilt through a convenient death and inheritance in the family. It goes gooey on us after dishing out a slice of diner-like Americana, showing our hero and his family as regular people and not cultists, and how one guy can make a difference if he has the right stuff. The obstacles in the cowboy astronaut’s path are the robotic FBI investigators, the rigid bank official trying to take his home away and the intransigent FAA head. Putting in cameos are Bruce Dern and Bruce Willis, whose parts are as insignificant as the film.

The supposedly magical tale lacks any magic, or for that matter anything profound or realistic to say. It can’t even touch base with the mediocre Field of Dreams–a film it most closely resembles. It beats to death a hackneyed children’s fairy tale laden with a stiff kind of goofiness that might (but shouldn’t) please a grade school audience. Even such a fine actor like Thornton can’t make us forget how muddled is the fantasy ride, how much it’s an insult to our intelligence and how tiresome is the film-making. 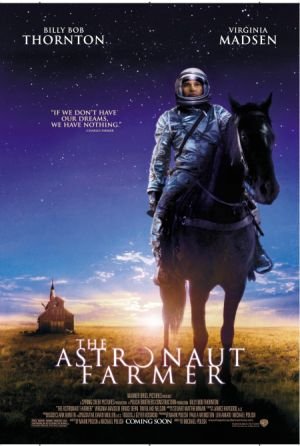