KING OF THE ZOMBIES

Veteran B-film filmmaker of almost no distinction, Jean Yarbrough (“The Devil Bat “/”The Naughty Nineties”/”In Society”), directs this lackluster zombie farce. It’s scripted by Edmond Kelso from his own story. The scares and the comedy are both almost non existent. Those viewing it solely from today’s standards, might find the black characters and the black comic relief hero character, Mantan Moreland, racially stereotyped. Though white people might also find the white heroes incredibly stupid and lacking even an iota of common sense, as dullness and density runs through this film as easily as animals run through a jungle.

A model plane with pilot Mac (Dick Purcell), government agent Bill Summers (John Archer), and Mr. Bill’s valet, the skittish black man Jefferson Jackson (Mantan Moreland), are lost in the fog somewhere between Cuba and Puerto Rico and are unable to pick up any radio transmissions. Summers is on a top secret assignment to Panama at the time before America was drawn into WWII, as his mission is to locate a missing admiral. The Americans are fooled into making a crash landing in the jungle when they hear radio messages in German and are running low on fuel. The surviving trio land in a graveyard, and follow the sound of drums to a nearby plantation mansion. There they are greeted by a strangely sinister but suave and hospitable Austrian refugee, Dr. Sangre (Henry Victor), who lives with his wife, niece and a handful of black servants. Sangre, in an eerie Bela Lugosi tone, warns them about evil spirits on the island. The black valet is forced to sleep in the kitchen with the black help and discovers by clapping one’s hands there will appear zombies. But no one believes him, thinking the crash landing made him see things. But things take a different turn when it’s discovered that Dr. Sangre is holding American Admiral Wainwright (Guy Usher), the one Summers is looking for, a prisoner in an underground dungeon. The admiral vanished in the same spot earlier while attempting to deliver info to Panama about the fortification of the canal. Dr. Sangre, a Nazi agent, is trying to pry from him the military secrets by using the voodoo ritual adopted from the Druids of “Rite of Transmigration,” after his torture methods didn’t work. After the experiment failed with his wife Alyce (Patricia Stacy), who was left in a trance, Sangre plans to turn his pretty niece Barbara Winslow (Joan Woodbury) into a zombie. By using this ritual of hypnosis, the admiral’s thoughts would migrate to Barbara’s mind in an easy manner.

When Mac acts strange, Summers locates another Caribbean doctor (Lawrence Criner), who lets on that Mac has been dead since morning and is now a zombie. Jefferson, who thought he was a zombie, discovers he’s not one when he can’t eat the brew the other zombies wolf down. The valet then joins Summers, and they follow the drums and screams to arrive in the nick of time to see Sangre forcing his innocent niece to finish the “Rite of Transmigration.” Sangre tries to get the zombies to eliminate the American intruders, but instead they revolt from their master and they throw Sangre into a fiery pit. Miraculously, Mac recovers and is no longer a zombie (Don’t ask how!).

The musical score by Edward Kay was surprisingly nominated for an Oscar. 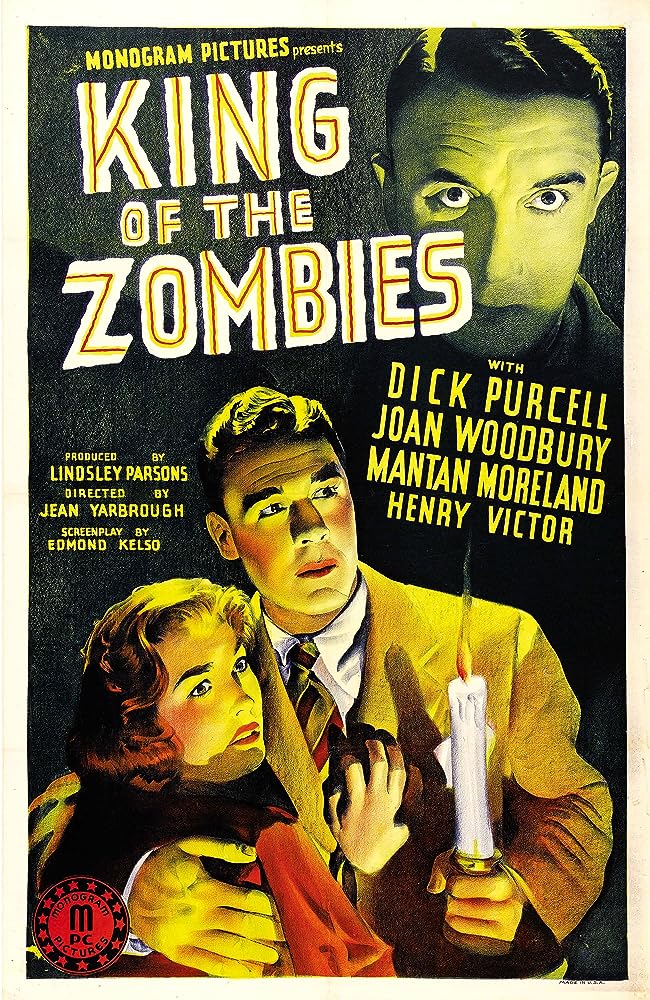