KING OF KONG, THE

“The film paints a strange portrait of a subculture that I found to be a drag.”

Seth Gordon directs, edits and photographs this documentary about compulsive video gamers. The oddball curiosity film about such an unlikely subject focuses on those with a loving devotion to the retro arcade game Donkey Kong, which they consider to be the hardest of all the video games to master. One must have perfect skills to work the joystick to avoid obstacles flung at them by Kong, as they climb an elevator. Its theme is framed around the opening quote by William S. Burroughs that suggests that the universe is based on war and games.

The ego-maniacal and arrogant Billy Mitchell of Hollywood, Florida, a hot sauce mogul and family man, has held the world record since 1982 for the popular video game. That record score of 800,000 has lasted for over twenty years. Steve Wiebe, a laid off worker from Boeing, residing in Redmond, Washington, took comfort during his unemployed days in playing Donkey Kong online. The compulsive Steve, painted with a saintly glow as compared to his not too likable rival, is now a middle-school science teacher with a wife and children he dotes on. In 2005 Steve broke Mitchell’s record with a score of over a million. An outfit called Twin Galaxies run by the Iowa-based Walter Day, who aspires to be a folk singer, promotes the tournaments, is the keeper of such records and referees all score claims. The winner makes the Guinness Book of World Records

The film paints a strange portrait of a subculture that I found to be a drag. The slight film is padded with pop tunes that don’t seem to fit the action on the screen. It plays as predictable as one of those Rocky underdog sports fiction films. The story has been sold to Hollywood and will return as a movie with actors playing these real-life video gamers. 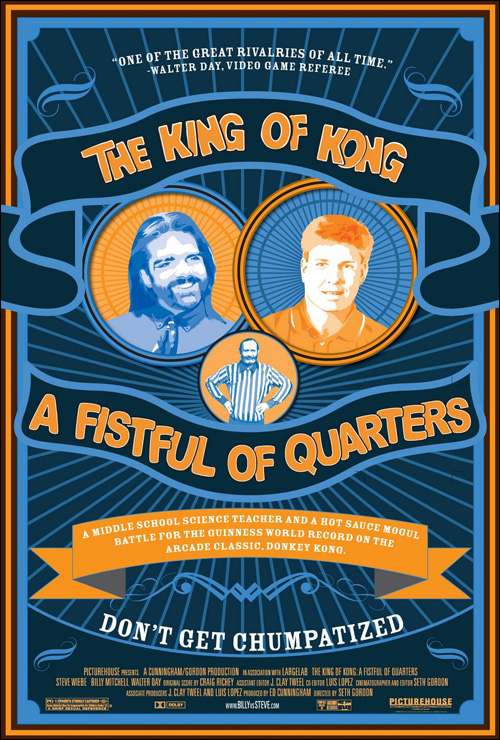