UNDER THE ROOFS OF PARIS (SOUS LES TOITS DE PARIS)

“A slight but charming bittersweet romantic comedy set in the streets of Paris.”

The first sound film by Rene Clair(“Man About Town”/”The Gates of Paris”/”Le Million”) has the talk minimized while songs are played throughout, and the story is told mostly through visuals (the director at first blush didn’t trust the new sound medium). The result is a slight but charming bittersweet romantic comedy set in the streets of Paris. My problem was that I found the lead character, Albert Prejean, rather tiresome and also never quite took to the artificial street scenes. Of note, the street sets were designed in the studio by Lazare Meerson. Though the film offered innovative camera movements for its day, it seems creaky by today’s standards but is still a good enough example of an early French talky by the renown director who influenced Charlie Chaplin.

Colorful street singer Albert (Albert Prejean) falls for the Romanian immigrant pretty onlooker Pola (Pola Illery), while a pickpocket works the crowd. After Albert meets Pola when returning the stolen money, she will that night innocently stay in his flat when her apartment key is snatched by her lecherous admirer, a petty thief, Fred (Gaston Modot). While the shy Pola is under the covers, Albert’s pickpocket friend drops off a satchel of stolen goods for him to watch. Later the police will wrongfully arrest Albert as the thief when they raid his place. In the meantime, Pola meets Albert’s wolfish friend Louis (Edmond T. Gréville) for protection and falls for his charms. Thereby the street singer must get released from jail and confront his friend’s advances on his dream girl. Albert is released when his thief friend confesses and then Albert confesses to the game-playing Louis, who wants to throw dice for the girl, that he really loves Pola and thereby wins her heart to join him as a street singing duo act.

Title is derived from the long opening shots of the humble Parisian roofs of the working-class section, while the street singer sings the titled song working the crowd for coin. 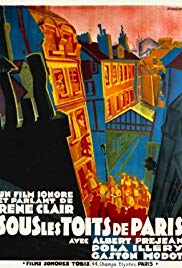 JOKER IS WILD, THE

WRITTEN ON THE WIND

WILD IN THE STREETS