Expatriate American filmmaker Joseph Losey (“The Servant”/”The Sleeping Tiger”/”The Big Night”) bases this tense, downbeat, class-conscious antiwar drama onJ.L. Hodson’s semi-autobiographical novel Return to the Wood and on the play Hamp byJohn Wilson. J.L. Hodson bases the novel on his own experience as a lawyer duringWW I, where he failed to get a solder free in his court-martial. It’s a war film with no battle scenes.

After three years of voluntary service duringWW I, the 23-year-old cockney, Pvt. Hamp (Tom Courtenay), a bootmaker in civilian life, has had enough of the bloody war (saddened by the death of all his mates in his unit and his wife’s infidelity) and is caught walking aimlessly away from the battlefield. Hamp is defended on desertion charges by the stand-offish but conscientiousupper-class officer, Capt. Hargreaves (Dirk Bogarde), who at first looks upon his working-class client with scorn and then relents when he begins to better understand his inarticulate client and realizes he’s too guileless to lie. The uncomplicated Hamp just tries to tell his mouthpiece what was going through his mind when he deserted, which arouses some humane feelings in the lawyer. But he’s unable to convince the court-martial that Hamp was not responsible for his actions. Capt. O’Sullivan (Leo McKern), the blustery unit doctor, testifies that in his judgment he was not suffering from shell-shock (what we would probably now call “post traumatic stress syndrome”) but cold feet.The simplistic Hamp never quite gets it that he committed a serious crime until he’s sentenced to die by a firing squad.

Losey’s gripping film, shot in black and white, focuses on the hypocrisy of society regarding military matters, and uses an academic debate on the morality of war in its attempt to see through the veils of society that sends its young to war and fails to take responsibility for the consequence of its action.

It won the British Academy Award for Best Picture of 1964, while Courtenay won the Best Actor Award at the Venice Film Festival. It’s more friendly to a stage production than cinema, which is not necessarily a bad thing. What it has going for it, are the splendid performances by the stars and the nobility of its humanitarian argument. 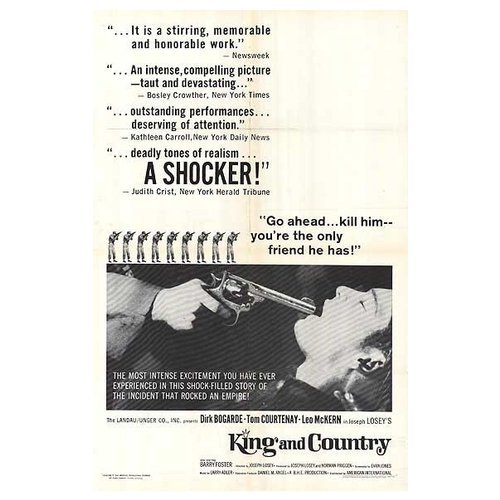