KILLER THAT STALKED NEW YORK, THE

“There’s not much in the way of thrills or surprises in this minor film noir.”

There’s not much in the way of thrills or surprises in this minor film noir. It combines a story about diamond smugglers and a smallpox outbreak in the New York City of 1947. It is based on the real threat of a smallpox epidemic for New York City that took place in 1946. The thin story is taken from a Cosmopolitan magazine article by Milton Lehman. It is mildly diverting because of its able depiction of America’s cold war paranoia during the early 1950s against anything foreign, as the film shows how an entire city can become terror-stricken by something unknown attacking it.

Upon entering New York City’s Pennsylvania Station from Cuba, Sheila Bennet (Keyes) senses she is being followed by custom’s police. The former singer has teamed up with her good-for-nothing husband, a piano player, Matt Krane (Korvin), to smuggle $50,000 worth of diamonds into the country. To make sure that you know that he is the heavy, he will speak with a thick foreign accent. Everything foreign in this film is either connected with something sick or with something dangerous to America.

Sheila calls from the train station, excitedly telling Matt that she mailed the diamonds to him because the cop was following her and will try to lose them before coming home. He tells her to go to a hotel and wait for him there, but she finds herself feeling ill and anxious to rest up at home. He doesn’t want her to be home because he is two-timing her with her own sister, Francie (Lola).

Sheila is able to give the Treasury Agent Johnson (Kelley) the slip by having the bellhop (Burke) show her the back way out. Feeling sick she nearly faints on the street, as a cop takes her to a local clinic. There, she comes into contact with a sweet young girl (Washburn) who is being taken to the hospital for whooping cough. She feels very maternal to her, giving the girl a pin ornament she was wearing that caught the girl’s eye.

Dr. Ben Wood (Bishop) treats Sheila for a cold, giving her a medicine and telling her to go home and get some rest. Later, when he checks on the little girl he is startled to find that she has come down with smallpox, an illness that has been eradicated from most of the world since the Middle Ages.

Meanwhile, after returning home and feeling sick, Sheila becomes aware of what Matt has been up to and that he has left both her and her sister; but, she knows he can’t leave town completely because he has to wait ten days before his fence (Smith) will pay him off.

Meanwhile, the city is thrown into a panic, as a few cases of smallpox develop. The city decides to vaccinate everyone, but runs out of the serum causing a panic. Coming into contact with Sheila and taking sick with smallpox are: the train porter, Sheila’s milk deliveryman, and her nightclub boss Willie (Backus). Treasury Agent Johnson and Dr. Wood both realize that the smallpox carrier and the smuggler are the same person and through a lead from Willie, they trace her to the flophouse in the Bowery where her brother is staying. But when spotted there, she escapes from them and goes to Dr. Wood’s office requesting more of the medicine he gave her. When he wants her to turn herself in, she shoots him in the shoulder and flees.

Sheila manages to stay alive from the fatal disease because of her determination to kill Matt and settle the score she has with him. This, supposedly, keeps her going, while the ones she gave the disease to are dropping like flies, including the little girl.

In the final scene Sheila waits for Matt in the fence’s place and forces him out on the ledge of the high-rise office building, where he looses his balance and falls to the pavement. This seems to duplicate the same punishment for him that he dished out to Francie, who committed suicide when he left her because she couldn’t face her sister. Dr. Wood, who seems to be omniscient, appears on the ledge to rescue Sheila and he gets all the information he needs on how and where she got the disease and all the people she was in contact with, just before she dies.

The action part of the melodramatic story was weakly told, while the noir characterizations of Sheila did capture the desperate feelings of the subject but it was not enough to overcome the inability of the story to be convincing. The city officials and Dr. Wood running around the city to stem the epidemic, seemed hard to fathom. The mechanical acting by everyone, except for Keyes, made the film appear as the B- film it was, despite the great noir camerawork of Joseph Biroc who caught how dark the city could be for someone on-the-run. 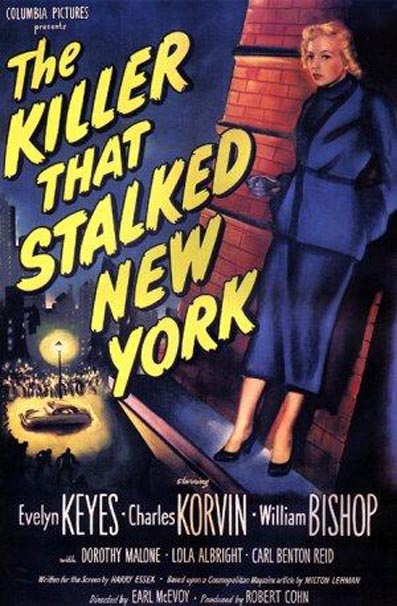