Based on the great adventure story Kidnapped by Robert Louis Stevenson. Under the heady direction of Delbert Mann (“Marty”/”Heidi”/”David Copperfield“) and the literate screenplay by Jack Pulman, the story remains faithful to the book and comes to life as a good taste family drama. It was initially released in 1938 and remade in 1941, and again in 1960. This version, though not exciting and much too talky, is nevertheless well-acted and well-photographed. It was made by AIP, and is a surprisingly classy version considering the studio’s dubious history of making mostly schlock.

It’s set in the last days of the Jacobite rebellion, in the 18th century. The Brits are slaughtering the Scottish forces aligned with the Jacobite Rebellion.

The 18-year-old orphan David Balfour (Douglas Lawrence) seeks shelter with his wicked uncle, Ebenezer Balfour (Donald Pleasence), and is not told he’s the rightful heir to the family estate. Uncle fails to kill him and then hires the ruthless sea captain, Hoseason (Jack Hawkins), to hold the boy in servitude on his ship. The captaine will later scheme to sell David into slavery in the New World. On its way to the Carolinas, Hoseason‘s ship rams into a small boat. The only survivor on the small boat is the colorful rebel Captain Alan Breck (Michael Caine). Breck was heading to France to finance his venture against the Crown. David and the Scottish nobleman Breck immediately hit it off and join forces against the cutthroat crew. When a storm hits, the ship is wrecked, and the adventure now has the two friends after reaching land trying to safely return to Edinburgh.

Trevor Howard makes for a good Lord Advocate. Vivien Heilbron elegantly plays the beautiful Catriona, a kinswoman of Breck, who is attracted to the young David. 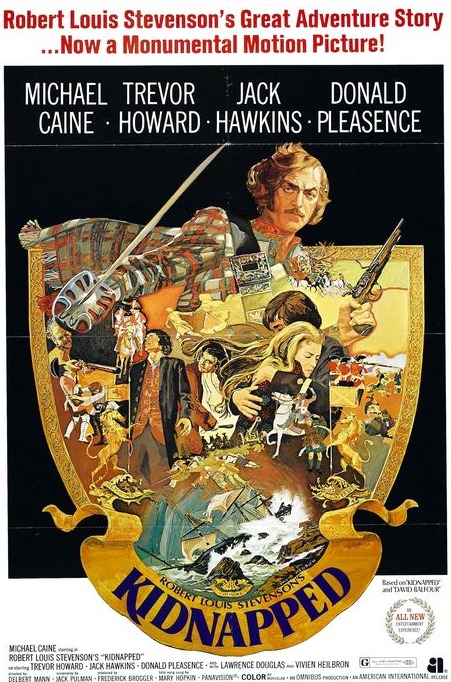