“Mediocre and illogical retro horror pic about a malevolent dummy.“

The Malaysian born James Wan (“Aquaman”/”Robotech”), the same director of the gory international hit Saw (2004), helms this mediocre and illogical retro horror pic about a malevolent dummy with his Saw collaborator Leigh Whannel. Whannel pens the script and co-writes the story with Wan. The supernatural stuff was dumb and unconvincing, while the hero figure was bland and the cast gave uninspired performances.

The ho-hum film never rose above its flimsy plot. A suit wearing ventriloquist doll named Billy is mysteriously left on the doorstep of Jamie Ashton (Ryan Kwanten) and his new wife Lisa (Laura Regan). When Jamie goes to pickup Chinese takeout food, he returns to find his wife brutally murdered and her face cutup like a doll. Jamie becomes a suspect and to get answers the released suspect drives back to his hometown of Raven’s Fall with the doll he stole from the police evidence room.

Once back home he becomes perplexed over a creepy rhyme about a ventriloquist named Mary Shaw (Judith Roberts) who went bonkers in the 1940s. Her story is a ghost story that’s told by the town moms to scare their young children into behaving. The curious Jaime wonders that Mary Shaw’s name was on the dummy’s case. Jamie briefly visits his estranged elderly wheelchair-bound stroke victim father (Bob Gunton) and his much younger third wife (Amber Valletta), as he wants answers about Mary Shaw and the ghost stories revolving around her. We witness the crude actions by the jerky investigating detective (Donnie Wahlberg) who followed him to Raven’s Fall. And, we learn of the tragic back story of Mary Shaw. She was accused of kidnapping a child (Steven Taylor) who called her a fraud when she performed in the theater.

The child was never found, but his family believed Mary Shaw did the crime and in revenge ripped out her tongue and killed her. Mary was buried with her 100 dolls in the local cemetery. But over time all those who participated in her grizzly murder and their relations, received the same bloody treatment she got. Jamie now believes the spirit of Mary lives in her dolls and that it was her voice that urged the doll Billy to kill.

The disappointing horror film fails to stand up to scrutiny as a story that’s even remotely possible. Even its twisty chiller ending that involve Jamie’s dad and stepmom seems hollow and manufactured. 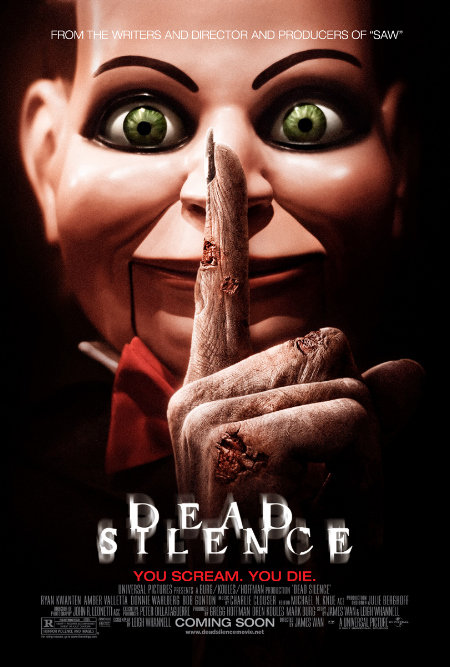