KID FROM SPAIN, THE\

“The film is short on plot and doesn’t have enough musical numbers to recover from the pathetic comedy routines.”

Leo McCarey (“Duck Soup”/”Ruggles of Red Gap”/”The Bells of St. Mary’s”) directs this dated musical comedy and it’s lavishly choreographed by Busby Berkeley for the famous Goldwyn Girls (the chorus line reportedly includes an unrecognizable Lucille Ball, Jane Wyman, Betty Grable and Paulette Goddard), which is the good news. The bad news is that it stars Eddie Cantor, whose comedy shtick veers between schmaltzy to unbearable. To say the least, the film is short on plot and doesn’t have enough musical numbers to recover from the pathetic comedy routines.

College roommates in LA, the American, Eddie Williams (Eddie Cantor), and the Mexican, Ricardo (Robert Young), are expelled just before graduation after Ricardo places a drunk Eddie in the girls’ dormitory as a practical joke. Ricardo fails to talk Eddie into going with him to Mexico, but while Eddie waits for Ricardo at the bank in a car he stole from the dean a robbery takes place and the robbers shanghai him into being their getaway driver and force him to go to Mexico instead of killing him. Meanwhile Ricardo arrives in Mexico to visit his girlfriend Anita Gomez (Ruth Hall), and gets the news from her father Alonzo (Noah Beery) that he’s not rich enough to marry Anita and is sent away, as it’s arranged for her to marry Pancho (John Miljan), a rich matador she does not love but who saved Anita’s late mother from a gang of notorious bandits. At the border crossing Ricardo accidentally bumps into Eddie, who is being hassled by a detective named Crawford (Emmett O’Connor) who suspects he’s the driver in the bank robbery. Ricardo tells Crawford that Eddie is the bullfighter Don Sebastian II from Spain, whose famous bullfighter father Don Sebastian I died in the ring, just to get the detective off Eddie’s back. To prove he’s a bullfighter, Crawford says he wants to see him in the ring on Sunday. You don’t need a road map to see where we are going with this story and how it all gets resolved. There’s also Rosalie (Lyda Roberti), Anita’s friend, who falls for Eddie when she thinks he’s a real bullfighter. Cantor’s real-life friend, the great American bullfighter Sidney Franklin, a Jewish kid from Brooklyn, appears as himself in the bullfighting scene just before Eddie fights his bull.

Though the film was ridiculously bad and had racial stereotyping it still did a good box office during the height of the Depression, even if it didn’t do as well as expected the escapist fluff film made independent producer Samuel Goldwyn some coin after he daringly borrowed a million dollars from the Bank of America to make the big-budget musical extravaganza and had the chutzpah to charge $2.20 per ticket during the movie’s New York run at the lush Palace Theater (Cantor, the immigrant kid who escaped the Lower East Side and poverty, wanted it to play in the Rivoli for only 75 cents). By the way, when it came to giving generously for charity, Cantor was a stand-up guy who never forgot his roots; the Surprise Lake camp he supported with his large donations sent many an underprivileged city kid away for a good time during the summer, as I went to his camp and my counselor was Mel Ferrer who just completed Scaramouche and taught us fencing (using his real name, his real identity was not revealed to the campers until near the end when word leaked out; he was a great counselor and told the best campfire stories I ever heard). 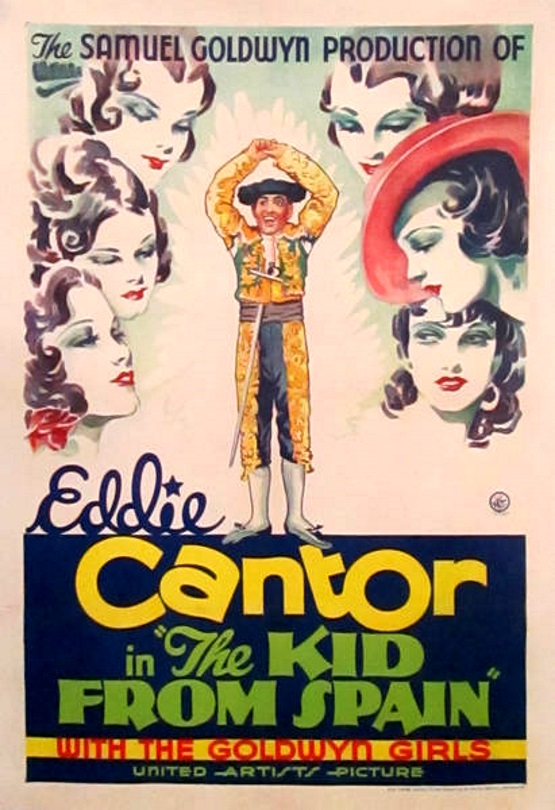