“Relies on eye-opening spectacular action sequences throughout to provide the thrills.”

Director Christopher Nolan (“Inception”/”Insomnia”/”Memento”) completes his superior Batman ‘Good vs. Evil’ trilogy that started with “Batman Begins” (2005) and “The Dark Knight” (2008). “Rises” is the final but weakest episode in the series–cluttered with too many back stories, too many clunky scenes and a cryptic ending that has too many contrivances to deliver a smooth exit from the series. Christian Bale again plays the DC comic book hero, and again is effective as the brooding billionaire with a nose for gizmos and a sensitivity for soul-searching. The story by David S. Goyer and Christopher Nolan and the script by the Nolan brothers, Christopher and Jonathan, tunes into the Occupy Wall Street movement of the recent newspaper headlines and to the current post- 9/11 threat of terrorism. The dark, humorless pic brings forth scenes of class warfare, a city under siege from terrorists, an economic downturn, the destruction of the stock market, a packed football stadium under a terrorist attack, a terrorist army living undetected underground in the city sewers, mobile nukes in the hands of terrorists, kangaroo courts and a city under a 1984 Big Brother type of surveillance. When a disgraced Batman (Christian Bale), who stopped wearing his cape, returns to Gotham City after 8 years in voluntary exile, after falsely accused of killing popular but perverted two-faced law and order advocate DA Harvey Dent, he returns to his luxurious family mansion as the spiritually distraught Batman, the alter ego of billionaire Bruce Wayne, and becomes a Howard Hughes-like recluse. His loyal butler Alfred (Michael Caine) frets over his loneliness and mental grief.

Things open with the excellent action sequence of a sky-jacking by terrorists of a CIA plane while in the air, and then it follows Bruce Wayne (Christian Bale) as he discovers that the wily, martial arts expert, sexy, cat burglar Selina Kyle (Anne Hathaway) has broken into his home safe to steal his mother’s pearls and his fingerprints, and warns him something big is about to happen in Gotham City. At the same time there appears the film’s arch villain, Bane (Tom Hardy), a menacing mercenary terrorist with evil plans to Occupy Gotham, whose face is mostly covered with an odd looking leather-and- metal grill-like mask contraption that’s used to deliver to him meds needed to stave off his physical pain he contacted while in prison. The psychopathic, bald and hulking Bane says he came to Gotham to bring justice to the ordinary citizen, who is living in a corrupt society where the rich and powerful take advantage of their positions to steal from the people without any consequences.

When the powerful Bane, a one-dimensional ruthless villain, and his trained army of thugs invade Wall Street and maneuver the market so that Wayne Enterprises loses all of Bruce’s money and Bane reveals himself as part of the hostile takeover of the company run by CEO/inventor Lucius Fox (Morgan Freeman), Batman goes into action to try and stop the Wall St. heist. Things turn increasingly ugly and into a war over who controls Gotham, as the cops are slow to react to the terrorist threat.

Commissioner Gordon (Gary Oldman) is hospitalized, but gets his wish to have Batman again try to save the city as a vigilante crime fighter, even if the city now disrespects Batman and are content Dent’s tough criminal laws have rounded-up all the violent thugs. Also on Batman’s side is the idealistic, resourceful and gritty beat cop John Blake (Joseph Gordon-Levitt) and wealthy investor in Wayne Enterprises — the philanthropist Miranda Tate (Marion Cotillard). From here-on the plot widens with twists at every turn, as it has a vulnerable and self-doubting Batman unsure if he can stop in time the madman monster Bane from blowing up the city with a ticking Atom bomb.

The complex but dullish plot takes a lot of air out of an overlong and somewhat ponderous film, that relies on eye-opening spectacular action sequences throughout to provide the thrills and some great IMAX format shots to keep it a stunning visual delight. But it’s derailed by too many tedious spots, and the difficulty in trying to hear the dialogue from the hoarse speaking Batman and the unusual muffled artificial sound coming out from the masked Bane. Nevertheless it’s entertaining and there are notable performances from Bale, Hardy and Hathaway, and solid ones from the always reliable Freeman, Caine and Oldman; though when it comes to sending a political message, it’s more heavy-handed than heavy and its politics are more reactionary than I would have expected from such a popular superhero icon. 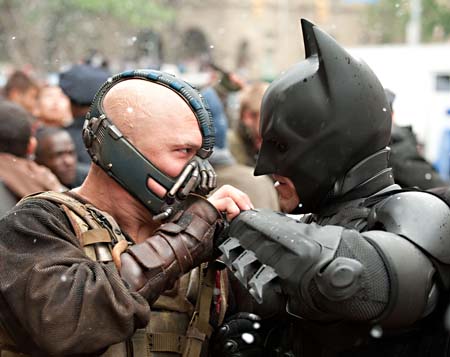