“What the film did fairly well was show a tolerant attitude by both the retiring rabbi (Eli Wallach) and the veteran priest (Milos Forman).”

A contemporary “light romantic comedy” about three childhood friends from junior high school in New York City’s Upper West Side, Jake (Stiller), Brian (Norton), and Anna (Jenna). As children, they do everything together as a trio. But Anna, who was a very pivotal part of their life because of her high energy and warmth and manner of bringing them all together, moves to California and the two boys lose contact with her. The boys still remain best friends. Jake chooses not to go into his father’s lucrative business, instead becomes a rabbi; while Brian becomes a priest. Anna Banana, as the boys affectionately call her, returns to New York for her job, after being away for 15 years. She has become a high-powered corporate executive, and when she meets the boys at the airport they see that she is still energetic and has also grown into a most beautiful woman attracting both of them. She acts and looks a lot like Gwyneth Paltrow.

The film runs needlessly on for over two hours and takes this story into many different areas concerning religious faith, personal goals, different cultures, comedy routines, and romance, with too many themes for it to adequately cover. It manages to concentrate mostly on the following: taboos in religious matters, which create many awkward moments for the filmmaker who tries to juggle the themes of an interfaith romance and of a priest trying to face his vow of celibacy; but, the main story is, of how both men fall for the same girl. It also depicts how both religious men try to shake up the complacency in their congregations, mainly with pop culture brought into their traditional services and with an interfaith community center they both initiate featuring karaoke music. Rabbi Jake amusingly brings in a Harlem gospel choir to sing the Jewish holiday song “Ein Kelohainu.” Both religious men use their abilities as stand-up comedians to fill their Upper West Side congregations and seem happy with their choice of vocation.

The film opens with a drunk Brian sitting in an empty bar and telling an incredulous bartender the story of why he is drunk…the old story of a rabbi and a Catholic priest… but this time with a slightly different twist! The film goes into flashback and Brian tells how Jake fell in love with Anna, but that Jake felt he couldn’t do anything about it because it would break his mother’s heart (Bancroft). He tells of how she cut off his brother from the family because he married a non-Jewish girl and how it would upset the congregation and its conservative leader (Rifkin), probably causing him to lose his job. Jake’s other problem is that the congregation does not want a bachelor rabbi and exerts pressure on him to marry a Jewish girl.

Anna’s problem is that she is married to the cell phone because she is always on the job, which leaves her feeling soulless; and, she is thinking for the first-time, now that she is 29-years-old, that life has past her by, that she might have placed the wrong values about what is important in life. She is ready to love Jake but because of the cultural problems involved, the romance is ending just as it begins.

For Brian, the problem is that he has fallen in love with Anna and doesn’t know about her romance with Jake. When she calls him late one night when she is upset that Jake left her he assumes, that she wants to see him because she feels the same about him and doesn’t know what to do. In one of many awkward scenes to make its point about religious restrictions, Brian foolishly starts kissing her and telling her he will give up his vows for her. She then tells him about Jake…which is the reason for his current drinking binge.

The film spends a lot of energy going back and forth among these characters, trying to understand why they are all so upset.

In Jake’s congregation, the members consider him a most eligible bachelor and fix him up with their daughters. It shows him on two dates and both with results that were not as funny as they were intended to be. On the first, a sexually aggressive date (Edelstein) tries to get him to take her into the bedroom against his better judgment. On the second, an ABC news correspondent (Sofer) tries to connect with him over a dinner date, where he brings along Anna and Brian. There actually didn’t seem to be any reason why he shouldn’t be going out with her, except the plot of the film is skewed that he shouldn’t meet a Jewish woman.

In between all these serious problems, the film is able to work best when it brings in its lowbrow comedy routines and pratfalls: a thirteen year old boy whose voice is breaking at his Bar-Mitzvah; the rabbi, being an avid collector since childhood of “Heroes of the Torah” trading cards, jumping for joy at receiving a hero rabbi card; the rabbi fainting at a circumcision ritual; the priestjumping butt-first into the holy water when his robes catch on fire;and,a pushy karaoke machine salesman (Ken Leung) who loves to sing.

The film was only mildly pleasing for the following reasons: Jenna Elfman was too attractive and had too much of a sunny disposition for either rabbi or priest, therefore the romance part of the film never took off. She was what she was, a high-level corporation person on the rise, more suited for someone in her field than either of these two childhood friends. The romance between her and the rabbi was not only unlikely, but not convincingly done. The pace of the film was meandering, focusing too much attention on close-ups of Jenna and the subplots that added nothing relevant to the main story. The story itself, which tried to be cute and touch upon current controversies, added nothing new by its discoveries. The film stopped dead in its tracks when it took itself too seriously and a series of sermons were delivered about how Ben Stiller should resolve his love problem. Its premise promised something groundbreaking to say about a nice Jewish boy loving a gentile, but ended up mimicking the traditionalists: if the female goy (not a Jew) wants to marry, let her convert.

What the film did fairly well was show a tolerant attitude by both the retiring rabbi (Eli Wallach) and the veteran priest (Milos Forman), who talked to the younger men in a kind way and gave them helpful reminders of who they are without trying to force something down their throat.

For first-time director and all-around actor Edward Norton (FightClub/ The People vs. Larry Flynt/ American History X) this was a curious film for him to choose to direct, since he chose one that is particularly lightweight, considering some of his acting roles have been in cutting-edge films. This makes you wonder where he’s coming from. The results are that the film is more awkward than controversial, more secular in spirit than religious, and it revisits ethnic comedy grounds that are all too familiar and have been done far better by someone such as Woody Allen. That love wins out over faith, should surprise no one who has watched Hollywood films over the years and how they love to give people the endings that make them feel good. The best one can say about this film, was that its heart was in a better place than its script. The worst that can be said, was that its responses to the controversies it brought up were decided in too timid a way for the film to have any impact. 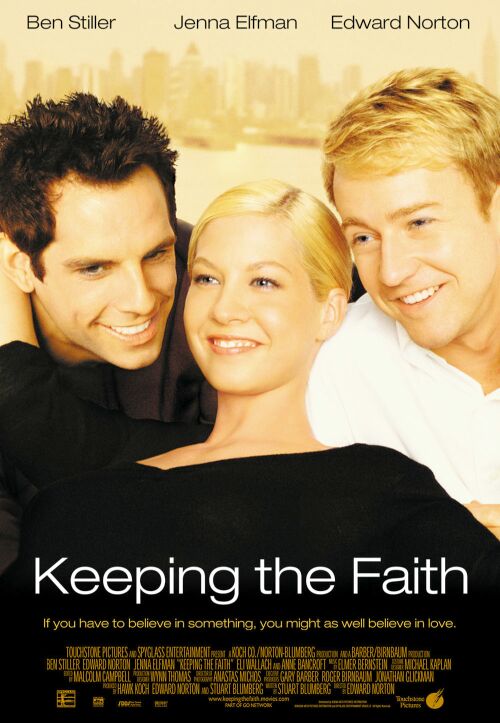