“Randolph Scott was born to play this kind of cowboy role.”

Joseph H. Lewis (“7th Cavalry”) directs with flair and great craftsmanship this better-than-average western; the first of two Technicolor westerns he made with Randolph Scott. It’s based on the novel by Brad Ward “Marshal of Medicine Bend” and the taut but hardly original script is by Kenneth Gamet.

For the past three years Calem Ware (Randolph Scott) has been the dedicated marshal of Medicine Bend; the famous hard-nosed lawman earned a reputation in many other wild frontier towns as someone outlaws don’t want to mess with. But he’s also someone with a haunting secret that keeps him as a loner dwelling in his spartan one-room apartment with only a passion for executing his job. His two best friends in town are Molly Higgins (Ruth Donnelly), who cooks meals for him in the boarding house where he stays, and the kindly town doctor Amos Wynn (Wallace Ford). The richest man in town is cattleman Asa Dean (James Bell), who hired Calem to be a one-man law and order force. Calem has managed to keep the town clean, but shady theater producer Thorne (Warner Anderson) and devious saloon owner Cody Clark (John Emery) have formed a secret partnership to make Medicine Bend a wide-open town so they can control it for their own profiteering ventures. They hired Dingo Brion to kill Calem, but when he’s killed instead they hire professional gunslinger Harley Baskam (Michael Pate).

When Calem is not being forced into a bruising fist fight by someone like Dingo’s giant brother Dooley (seeking revenge), or running down knife thrower Juan (hired by Cody), he’s with his undependable dance hall singer wife Tally Dickinson (Angela Lansbury). She recently came to town to star in a show produced by the oily Thorne, and it’s revealed what’s haunting the marshal is that she ran out on him nine years ago at Apache Wells because his job was too dangerous. The other piece in the romantic puzzle is Cora Dean (Jean Parker), the wife of Thorne’s rival. She is having an affair with Thorne, but when Tally comes to town the villain drops her like a hot potato to pursue his old relationship with Tally–not knowing she’s already married to the man he wants to kill.

It builds to a conventional shootout finale. The marshal, who wishes to retire once he cleans up the town of these villains, gets his chance to ride off in the sunset with his reinvigorated wife, as the hired gunman comes after him and Calem disposes of him and then goes after the heavies Cody and Thorne.

The characters are forcefully portrayed; the scenes are stunningly visual; the action-packed classic western makes the most of its routine tale. Randolph Scott was born to play this kind of cowboy role. 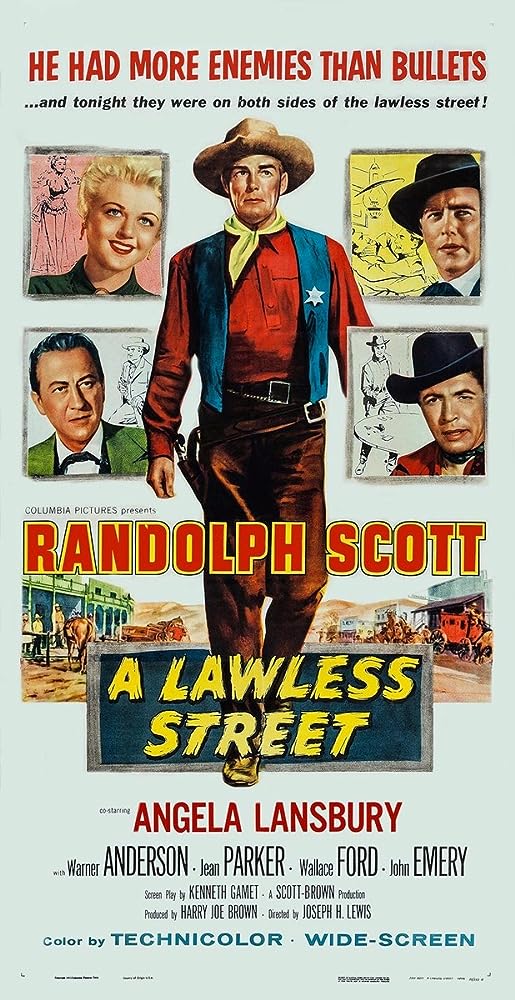