“This was the film Wajda wanted to make all his life.”

The great 82-year-old Polish Filmmaker Andrzej Wajda(“Ashes and Diamonds”/”Man of Marble”/”Innocent Sorcerers”) directs his version of the 1940 massacre of 22,000 Poles, with some 15, 000 being Polish military officers and the rest civilians. It’s a fictional take on the real tragedy that was carried out in secret in the Katyn forest on Stalin’s orders and consequently blamed on the Nazis. The cover-up is believed by the Poles throughout the Cold War, revealing that the Soviet occupation of Poland was no different than the Nazi’s cruel one. Wajda’s father was one of the Polish officer’s executed, which occurred when the future director was only 14. This was the film that Wajda wanted to make all his life.

Wajda based the film on the novel “Post Mortem” by Andrzej Mularczyk, unfortunately it is poorly written by Wajda, Wladyslaw Pasikowski and Przemyslaw Nowakowski. The harrowing film, both a personal one and one made for his country, graphically shows the slaughter in the film’s memorable concluding 10-minute sequence (one of the most powerful climaxes I can recall) and supplies details in a documentary-like manner that is good cleansing material for a country so deeply affected. It also shows through its fictional characters how the occupied Poles lived through the Nazi years.

The pic follows four fictional families, as it crisscrosses their story-lines. The main story is about Anna (Maja Ostaszewska), a mother supposedly meant to be Wajda’s, who in1939, at a time when Hitler and Stalin have a pact, arrives in Cracow in search of her husband Andrzej (Artur Zmijewski), a captured Polish officer who out of respect for doing one’s duty refuses to abandon his cavalry unit to run away with her despite her pleas. Soon afterwards the regiment is shipped to eastern Poland for internment, where the Hitler-Stalin pact allowed the Soviets to rule, while the Germans in 1939 marched into the remainder of Poland without much of a fight.

Other highlighted families include an interned general (Jan Englert) and his proud wife (Danuta Stenka), who refuse to knuckle under to Nazi pressure to campaign against the Soviets. The shameful story of a survivor, Andrzej’s friend Jerzy (Andrzej Chyra), who climbs the Communist Party ladder in Poland after the war by lying for the Soviets by falsely saying the massacre in Katyn was by the Nazis. The fourth story-line follows Jerzy’s sisters Agnieszka (Magdalena Cielecka) and Irena (Agnieszka Glinska), who rebel against Poland’s postwar Communist regime.

The pic’s documentary part has the Germans in April 1943 announce the discovery of mass gravesof Poles at Katyn with no explanation. On January 18, 1945 Cracow is liberated by the Red Army, and the Soviet propagandist newsreels blame the Germans for the massacre at Katyn.What Wajda masterfully does, despite the film being uneven as it shifts too awkwardly into scenes that don’t seem continuous, is to slowly bring in the overwhelming details surrounding the massacre and reveal precisely what took place in the spring of 1940 when the Polish officer internees were transported by railroad east to Smolensk and then mechanically killed by the Soviet military before buried in a mass grave.

The popular history drama did a big box office in Poland, as the grim atmospheric period film shuns sentimentality and uncovers the hurtful truth. It leaves one as a witness to a horrific incident in history, one the Polish people have lived with for a long time and have seen it controversially divide the country. 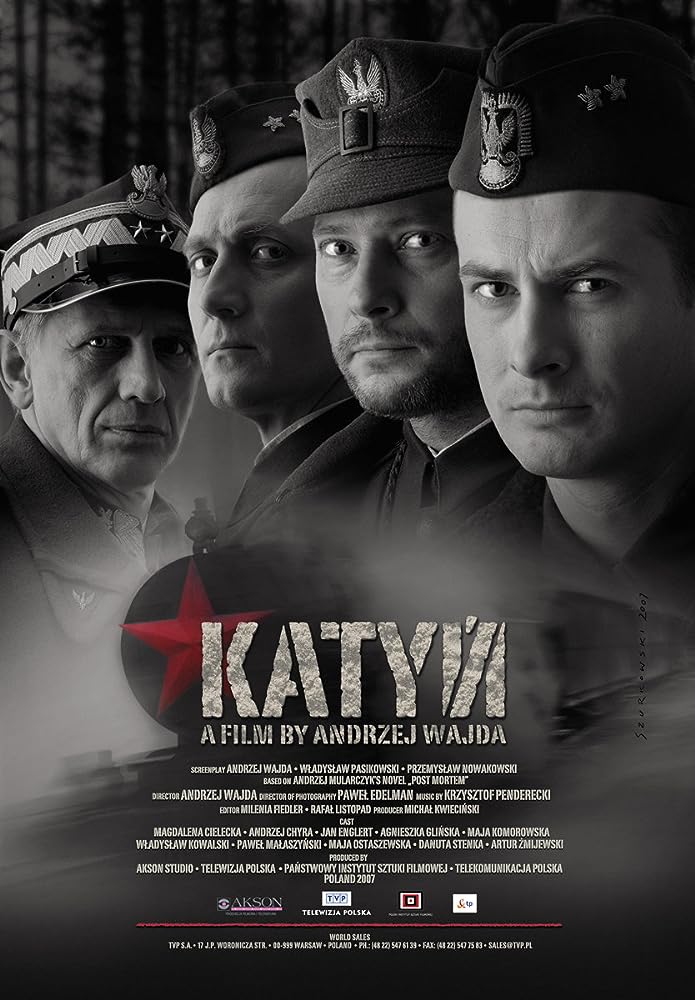