“It’s one of the noted Italian directors more vibrant films that captures him at his most playful and incisive.”

The popular Amarcord won the Academy Award for Best Foreign Film in 1974. Federico Fellini (“La Dolce Vita”/”8 1/2″/”Juliet of the Spirits”) directs this fictitious semi-autobiography that takes us back to a place in the province of Romagna that tries to emulate Fellini’s seaside hometown of Rimini during the Fascist regime (when the entire community seemed childlike, living in an authoritarian regime that did their thinking for them).

Amarcord translated means I Remember. It’s cowritten by the 53-year-old Fellini and Tonino Guerra with an air of capriciousness, vulgarity, nostalgia, exuberant melancholy, misgivings of anger and shame, affection for most of the locals (the exception being the Fascists), and mood pieces that are energetically inspired by Fellini’s stunningly beautiful excessive imagery. It’s one of the noted Italian directors more vibrant films that captures him at his most playful and incisive, when he was still at the top of his game. Fellini seems to be having a ball as he takes us through an evocative season of his hometown events, sometime in the early 1930s, starting with the first signs of spring that have “puffballs” blowing in the wind and through a winter snowstorm that lasted four days and finally to the colorful outdoor mid-summer marriage of the sexy 30-year-old hairdresser Gradisca (Magali Noël) finding at last her Gary Cooper in a policeman who lives in a far away town.

The narrator of “Amarcord” is called The Lawyer (Luigi Rossi), who is a scholarly fellow with a fondness for revealing historical dates that establish links between the present and the town’s rich past that dates back to 268 B.C. But the town idlers at times find him a bore and pelt him with vegetables, which makes for some juvenile comedy.

The rowdy Biondi family is featured as the eyes through which we see things in town. The short-fused hard-working patriarch is the stone mason foreman Aurelio (Armando Brancia), a staunch anti-Fascist who one day is brought to the police headquarters and grilled for making anti-Fascist remarks and forced to drink castor oil. The matriarch is the lovable Miranda (Puppela Maggio), who has a way of handling the men with tough love and of constantly bickering with her grumpy hubby. Titta (Bruno Zanin) is the mischievous smart-alecky teenage son, who hangs out with a bunch of morons, finds religion to be dishonest, is sex-starved (masturbates over Gradisca’s wiggling ass) and luckily one day finds heaven when the buxom tobacconist (Maria Antonietta Beluzzi) lets him suck on her tits. The film’s most amusing scene has the family taking Aurelio’s harmless crazy 42-year-old institutionalized brother Teo (Ciccio Ingrassia) out to a farmhouse outing and he climbs a fig tree refusing to come down.

Most of Fellini’s set-pieces are of fragmented memories that concern religious, cultural and social things that the filmmaker masterfully weaves into a plot-less film that holds one’s attention. One of the best set pieces has the townspeople in their small boats by the harbor gleefully watching a giant luxury ship pass all lit up at night and noting this was the only thing the Fascists built that was worth something. But not all the set-pieces and sight gags work, as they veer between witty bawdy antics that are hilarious and raucous low-brow humor that incorporates fart jokes and lame bedroom jokes that at best only produce mild snickers. 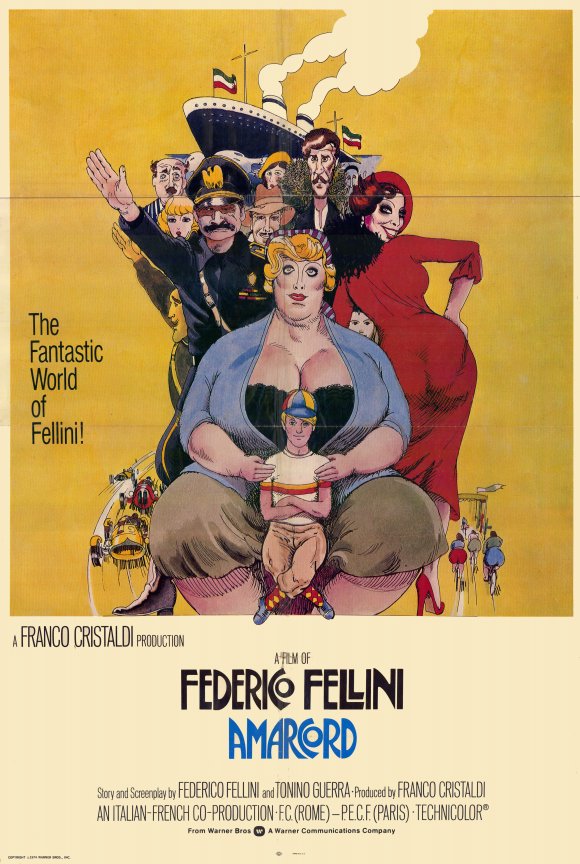