JUST AROUND THE CORNER

“The tepid melodrama doesn’t work, but there’s charm in perky Shirley’s performance and her bouncy musical numbers with Bill Robinson.”

I’m reviewing the black and white version, there’s also a colorized version out on DVD. In this Depression-era musical drama director Irving Cummings (“My Gal Sal”/”Louisiana Purchase”/”Belle Starr”) asks his child star Shirley Temple to end the Depression all by herself. It’s based on the story “Lucky Penny” by Paul Girard Smith and written by Ethel Hill, J.P. McEvoy and Darrell Ware.

Penny Hale (Shirley Temple) is removed from her exclusive private girls school by her father Jeff Hale (Charles Farrell). After arriving at the posh Riverview Hotel, Penny is told by the youngster Milton Ramsby (Bennie Bartlett) that she will no longer live in the penthouse but in a small room in the basement and that the penthouse is now occupied by himself, his older sister Lola (Amanda Duff), his mother Julia (Cora Witherspoon), and his wealthy uncle, Samuel G. Henshaw (Claude Gillingwater).

Penny’s dad explains to her that he cannot find work as an architect since the bank foreclosed on the building he was designing, the East Gate Project, and he has been forced to work as the hotel maintenance man to make ends meet. Mr. Waters (Franklin Pangborn) is the building manager and her dad’s gruff boss, who one day scolds the happy-go-lucky Penny for distracting her dad while he should be working and vows if it happens again he’ll fire her dad.

Jeff is romantically involved with Lola and asks her to help him change her Uncle Henshaw’s mind about employment–he was the one who hired Jeff for the East Gate Project. But, after losing a bundle on the project, Henshaw refuses any help and Lola decides to break off the relationship with Jeff.

The next day Penny rescues Milton from neighborhood ruffians and in appreciation he takes her to the hotel playroom, but the spoiled rich children make her feel unwelcome and she departs in embarrassment. Her dad tries to cheer Penny up by telling her “Uncle Sam” will put an end to the Depression. Penny thinks Henshaw resembles the “Uncle Sam” cartoon that Jeff shows her and confuses the two as being the same person. Thereby Penny is very nice and helpful to Henshaw, and everything works out in the end when Penny puts on a benefit show with doorman Cpl. Jones (Bill Robinson) to raise money for Henshaw’s floundering business and her dad is back together with Lola and working as the chief architect for Henshaw. During the show Robinson sings “Brass Buttons and Epaulets” and dances. While Shirley sings “I Love to Walk in the Rain.”

The tepid melodrama doesn’t work, but there’s charm in perky Shirley’s performance and her bouncy musical numbers with Bill Robinson. Though one of Shirley’s minor films and one signaling the beginning of her decline as a crowd favorite, there’s still enough energy to keep it watchable. The title is derived from the Hoover administration’s optimistic slogan that prosperity was “just around the corner.” Ironically it’s now 1938 and the Depression is still going strong. But Shirley in her childish Hollywood optimism tells the viewer to relax, that she knows how to end the bad times–which is a feel-good message for the audience that has always worked to bring Shirley’s films a good box office. 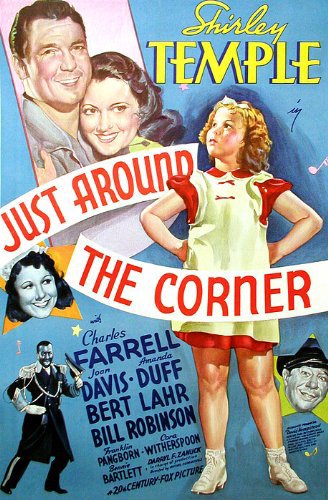