DECALOGUE, THE (aka: DEKALOG) (aka: THE TEN COMMANDMENTS) (Polish TV)

“Brilliant and moving, a masterpiece about the fragility of human nature.”

1-“I am the Lord thy God; thou shalt not have other gods before me.”

The caring widowed university professor (Henryk Baranowski) lives in a large high-rise apartment complex with his intelligent and inquisitive 11-year-old son Pavel (Wojciech Klata), who pumps him with questions about death, the soul and computers. Pavel is looked after by his Catholic believing aunt Irena (Maja Komorowska). The scientist father trusts completely in his computers and his scientific measurements, so when Pavel on a freezing day in Warsaw asks to get his ice skate Christmas present early he does so after dad calculates that conditions make it certain the ice won’t crack. But a freak thaw occurs on the lake and an unforeseen tragedy befalls the skater.

The film offers a shattering insightful view to shake those up who never figure on chance in their belief in dogmatic certainties.

2-“Thou shalt not take the name of the Lord thy God in vain.”

Dorota Geller (Krystyna Janda) is an attractive violinist with the Philharmonic. She’s troubled that her husband Andrzej (Olgierd Lukaszwicz) is dying of cancer. She wonders if he will live, as she has a big decision to make. After visiting her husband in the hospital, she confronts the elderly loner widowed doctor (Aleksander Bardini), who is a consultant in the hospital where her husband is a patient and he lives in her same hi-rise apartment building, to ask if he can tell her with certainty if her husband will live. She tells the doctor that she’s pregnant by another man (we learn later it’s the pianist in her orchestra) and says if she knows her husband will live she will get an abortion; on the other hand, if she knows he will die, she will give birth. She puts the baby’s fate in the hands of the doctor’s prognosis, and the film questions if the medical profession could or should play god.

3-“Remember the Sabbath day, to keep it holy.”

Christmas fills the bill for the Sabbath in this third installment of Krzysztof Kieslowski’s take on the Ten Commandments for Polish TV. It’s Christmas Eve in Warsaw and the family man, cabbie Janusz (Daniel Olbrychski),returns home dressed as Santa Claus. In a traditional celebration he gives presents to his two children and loving wife Zona (Joanna Szczepowska). He then attends alone the Midnight Mass and spots without meeting there his ex-mistress from three years ago Ewa (Maria Pakulnis). Back home he receives a call from Ewa to help her search the streets for her missing husband Edward Garus. Janusz lies to his wife by telling her about his taxi being stolen. For the rest of the night the anxiety-driven Ewa leads Janusz around a wild goose chase across town and under various pretexts keeps him with her until 7 a.m., supposedly so she wouldn’t be alone on Christmas Eve. The affair ended three years ago after Edward on a phone tip caught them in the act, but he left Ewa anyway after making her promise not to see her lover again and is now a family man living in Krakow.

Kieslowski shows that the festive and holy Christmas Eve could also be a cruel night for those who are lonely and despondent, and that despite the religious nature of the holiday there seems to be an absence of charity and reaching out to the unfortunate.

4-“Honor thy father and thy mother.”

Anka (Adrianna Biedrynska) is a 20-year-old acting student raised by her kindly widowed architect father, Michal (Janusz Gajos), ever since her mom died when she was only 5 days old. When dad goes on one of his frequent business trips during the Easter holiday, he leaves behind in the open for the first time a sealed envelope marked “not to be opened before my death.” Three days later Anka opens it and it reveals that Michal is not her biological father. This causes a new twist in their close relationship. Even though she has a boyfriend, Jarek (Artur Barcis), she has always felt a desire for Michal and now finds out that he feels the same. The two must struggle to relate with each other in a new way after this startling revelation, as Kieslowski deftly deals with incestuous urges and all its implications.

A mentally troubled 20-year-old country boy named Jacek Lazar (Miroslaw Baka) wanders aimlessly around Warsawand randomly and brutally by strangulation with a cord murders a cabbie (Jan Tesarz). At his trial he’s defended by a young new idealistic lawyer, Piotr Balicki (Krzysztof Globisz), who doesn’t believe in capital punishment. Jacek is found guilty and is brutally executed by hanging. Kieslowski shows how both acts were brutal, one a crime and one legitimized by the state. The taking of lives in these acts show that Polish society doesn’t obey the commandment “Thou shalt not kill.” It’s a powerful and raw film, that in an even-handed way asks if anyone has the right to kill. Kieslowski has presented an unanswerable argument in the cause of how to serve justice, in a film that gives both sides many things to ponder.

6-Thou shalt not commit adultery.”

Tomek (Olaf Lubaszenko) is a 19-year-old loner post office worker living with the elderly mother (Stefania Iwinska) of his friend, who is living abroad. He’s obsessed with spying on his attractive promiscuous older woman neighbor Magda(Grazyna Szapolowska) for the last year, first using opera glasses and then a telescope to peer into her window from his apartment across the courtyard of her hi-rise building. Eventually circumstances make it necessary for him to confess to Magda, and the woman is first annoyed and then out of curiosity plays games with him as he tells her he loves her. It leads to his slitting wrists and surviving, as he feels love is more than just having sex.

Kieslowski expanded this short story into a full-length theatrical version called A Short Film About Love. It seems to be also about loneliness, being disillusioned and making a connection with another being, as it is an offbeat and telling love story.

When she was 16 Majka (Maja Barelkowska) gave birth to Ania (Katarzyna Piwowarczyk), as she was knocked-up by her young teacher Wojtek (Boguslaw Linda). To avoid a scandal and because Majka’s mother Ewa (Anna Polony) yearned for another child, as she was prevented from having more children after giving birth to Majka and thereby treated her coldly, all parties agreed that Ania was to be raised thinking Ewa was her mother and Majka her sister. The only love Majka receives is from her passive but kindly organ-pipe maker father (Wladyslaw Kowalski). Six years have passed and Majka wants her child back, and resents the child calling Ewa mummy. When Ewa resists, Majka kidnaps Ania and takes her to the cabin in the woods in Jozefow, where Wojtek resides as a teddy bear maker. Majka calls mom and tells her she will only return with the child if allowed to bring her up as her real mother.

Kieslowski turns it into an insightful examination of the difficulty of growing up and of being a parent, as he poses the trick question whether you can steal something that is already yours.

8-Thou shalt not bear false witness against thy neighbor.”

This schematic episode in the series raises the Jewishquestion of Polish guilt during WW II of sheltering Jews from the Gestapo. Elzbieta Loranc (Teresa Marczewska) is a New Yorker who was born in Poland and is renown as a researcher of the fate of the Jewish war survivors. She’s visiting Warsaw and allowed to sit in on the lecture of elderly ethics professor, Zofia (Maria Koscialkowska). During the class Elzbieta is allowed to tell a true personal story that took place in 1943 when she was a 6-year-old Jewish child in Warsaw and to survive the camps is offered sanctuary on the condition that she obtain a certificate of baptism. The nervous Catholic couple who have promised to help refuse on the dogmatic belief that they will not bear false witness. Thereby the child is condemned to almost certain death, but was fortunately taken in by others and raised by them until the war was over. Zofia was the wife of the couple who refused the girl santuary and invites Elzbieta home to explain why she did what she did. She says it was because her husband was a member of the Resistance and they had received false information that Elzbieta was part of a Gestapo plot to infiltrate the underground.

This was the least compelling story in the series, as explanations of what happened seem unclear even after explained (like we never clearly learn what the tailor’s part was in all this, as he refuses to talk about anything but making clothes). Nevertheless it does deal with the Polish sense of guilt for not doing enough during the German occupation to help the Jews and allows a Jewish survivor, adorned with a Catholic cross, a chance to see first-hand what courage it took to protect them from the Nazis.

9-“Thou shalt not covet thy neighbor’s wife.”

A once promiscuous surgeon Roman (Piotr Machalica) is told by his doctor friend after an exam that he’s chronically impotent. He then lets his attractive airport-receptionist wife Hanka (Ewa Blaszczyk) know that it’s alright to take a lover. But he’s soon overcome with jealousy and spies on her. He learns of her affair with a young physicist named Mariusz (Jan Jankowski), but is unaware that she’s broken off the relationship. This leads to an attempted suicide for the crest-fallen husband, who doesn’t realize how much his wife loves him and still wants him despite no sex.

It’s a complex adult look at how marriage and love can be such a rough road to traverse at times, and how trust is essential.

10-Thou shalt not covet thy neighbor’s goods.”

This is a black comedy offering a life lesson on how coming into an unexpected fortune might be a more destructive than a positive thing. The death of their estranged athletic reclusive widowed father, finds his struggling sons surprised at their rich inheritance (worth tens of millions zlotys). The married with a child conservative middle-aged Jerzy (Jerzy Stuhr), the oldest son, and his single estranged carefree twentysomething brother Artur (Zbigniew Zamachowski), a singer in a punk rock group called “City Death,” visit after the funeral dad’s dumpy flat protected by a steel door and discover he left behind big debts and a priceless stamp collection to the sons he ignored.

The struggling simple-minded brothers soon get involved with the crooked stamp collecting shop owner (Henryk Bista), someone who is way to cunning for these two lightweights, who proposes a bizarre deal: that he will give the brothers the missing stolen rare stamp from the Austrian rose Mercury series that their father most wanted but was unable to locate and Jerzy will donate his kidney to the shop owner’s ailing daughter. After Jerzy agrees and is in the hospital, their place gets robbed despite their upgraded security of an alarm system, window bars and a Rottweiler guard dog. The brothers, who suddenly became greedy because of their inheritance, are devastated to learn that their entire stamp collection is pinched and become increasingly paranoid that the other stole it. 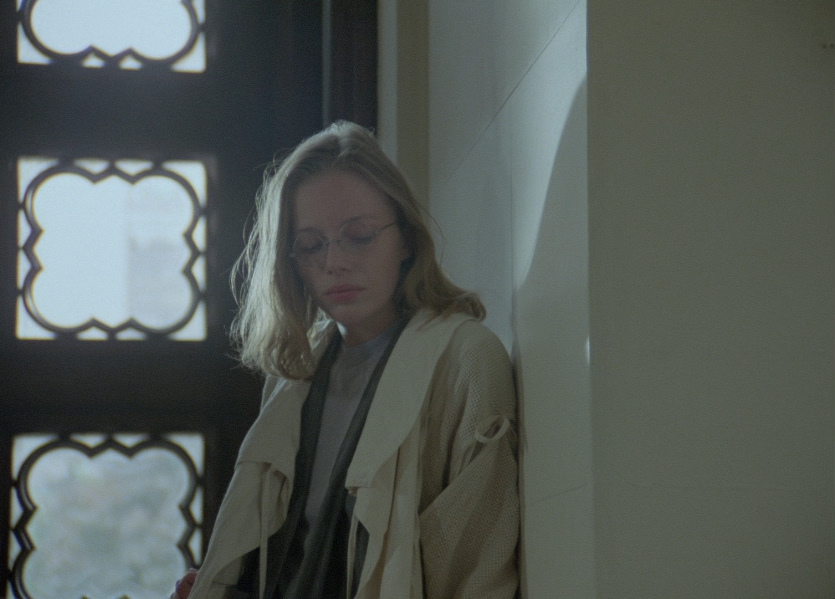