“Schlock art to get lost in like one would in a jungle.“

Schlock art to get lost in like one would in a jungle. It might not be something to be taken seriously, but it’s good for a few cheap laughs. Ex-Tarzan player Johnny Weissmuller is Jungle Jim, as this time we see him dressed with his new safari wardrobe as he leads a female scientist, Dr. Hilary Parker (Virginia Grey), looking for a cure to polio, on an African safari to the temple at Zimbalu, the lost burial place of the ancient kings (shot on the Columbia back lot and nearby Bronson Canyon). Jungle Jim has to fearlessly deal with witch-doctors, stampeding elephants, an attacking crocodile, a man-eating leopard, a ferocious lion and a clever greedy white villain.

Director William Berke (“Street of Sinners”/”The Mugger”/ “Danger Zone”) manages to keep it from being totally laughable (no small feat), as he deals with an inarticulate and overweight star and a weak screenplay by Carroll Young (based on the comic strip by Alex Raymond) that cries out for a more civilized story.

The film opens in the jungle at Nagandi in Africa, where Jungle Jim is unsuccessful of his rescue of a terrified native running away in fear and being attacked by a leopard. The dead native clutched in his hand a valuable ancient small golden vial containing hieroglyphics and a gummy paste. Jungle Jim takes it to the district commissioner Godfrey Marsden (Holmes Herbert), who sends the vial to the Archaeology Department and discovers that it came from the temple at Zimbalu and the paste is a deadly poison used by the devil doctors to paralyze their vics but in the Western world if this paste is purified and used in small amounts it could act as a cure for polio (before the discovery of the Salk vaccine in the 1950s).

American scientist Dr. Hilary Parker goes on the expedition with Jungle Jim, who is assisted by Kolu, (Rick Vallin), chief of the Masai, as the tribesmen join the expedition. Parker says the expedition is important because of its archeological value, the buried treasure and the promise of a cure for polio.

Photographer Bruce Edwards (George Reeves, before cast as Superman) decides to follow them and steal the treasure, and does his best to try and kill Jungle Jim by stealth. Also joining the party uninvited is Zia (Lita Baron), the spitfire sister of Kolu. To keep things childishly fun, there’s the lively antics of the pet terrier of the scientist named Skipper and Jungle Jim’s mischievous pet crow, who is perched on his shoulder.

The climax has the safari party battling the witch-doctors, who camp out at the Zimbalu temple, and the devious Edwards. An aging and a seemingly unenergetic Jungle Jim frees the expedition members from being bound by the devil doctors and overpowers the dangerous Edwards, and the appreciative scientist brings home the polio cure and gives Jungle Jim a romantic look of yearning. 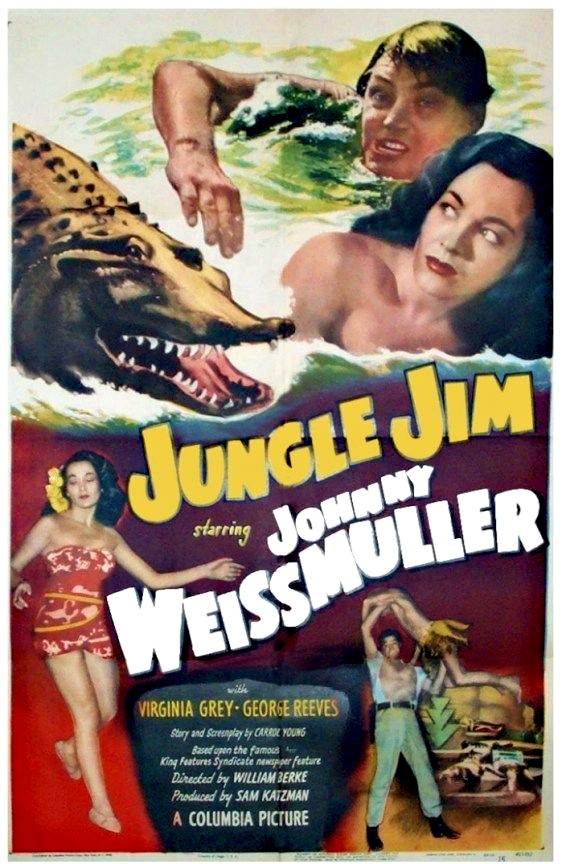