“A dated satire on pollsters, that lacks an edge.”

The regular writer for Frank Capra pictures, Robert Riskin, scripts this Capra-esque story and is co-writer of the story with Joseph Krumgold. Director William ‘Wild Bill’ Wellman (“Battleground”/”A Star is Born”/”The Ox-Bow Incident”)gives this tame pic his best shot by trying to prevent it from becoming too corny and at least saves it from looking totallyCapra-esque. It’s a dated satire on pollsters, that lacks an edge.

Rip Smith (James Stewart) is a cynical opinion pollsterresiding in Manhattan who schemes to get rich quick by discovering a wholesome ideal typical “Middletown” American small towncalled Grandview, where he can secretly poll the locals in one spot and thereby save time and expenses while getting an accurate read on what most Americans think. Posing as someone starting a new insurance business in town, Rip is accompanied to Grandview by his right-hand man Ike Sloan (Ned Sparks ) and statistician Mr. Twiddle (Donald Meek). Rip is welcomed by a former member of his army unit, Hoopendecker (Kent Smith), the high school gym teacher who wrote him about his average American town, and Rip gets to be basketball coach of the losing high school team when prompted to by Hoopendecker. Under his coaching, the kids become winners and Rip becomes a popular figure in town. Rip even wins over the single lady editor of the local newspaper, Mary Peterman (Jane Wyman), who initially had reservations about him when he opposed her progressive aim to build a new civic center. Rip wants the town to not change, as he feels that will interfere with the perfect results he’s getting from his poll questions. A romance develops between Rip and Mary, but it sours when Mary discovers the truth and prints how her town is being used by Rip. The town quickly goes from a boom town to a town ridiculed throughout America, until Rip comes to the rescue and saves the town from its own stupidity by having them pull up their britches and fight back. When the citizens refuse to quit on the town’s rebuilding plans because investment money had dried up, they are rewarded by compliments throughout the country for showing a backbone and are once again thought of as wonderful Americans that live in an ideal town.

The pic might be on the right track of fighting against greed, supporting progressive programs and its encouragement of town unity, but the story as executed was dull and hardly credible.

Magic town bombed at the box office, which was probably a lesson for Stewart to stay away in the future from such fluff and instead saddle-up with more challenging roles. 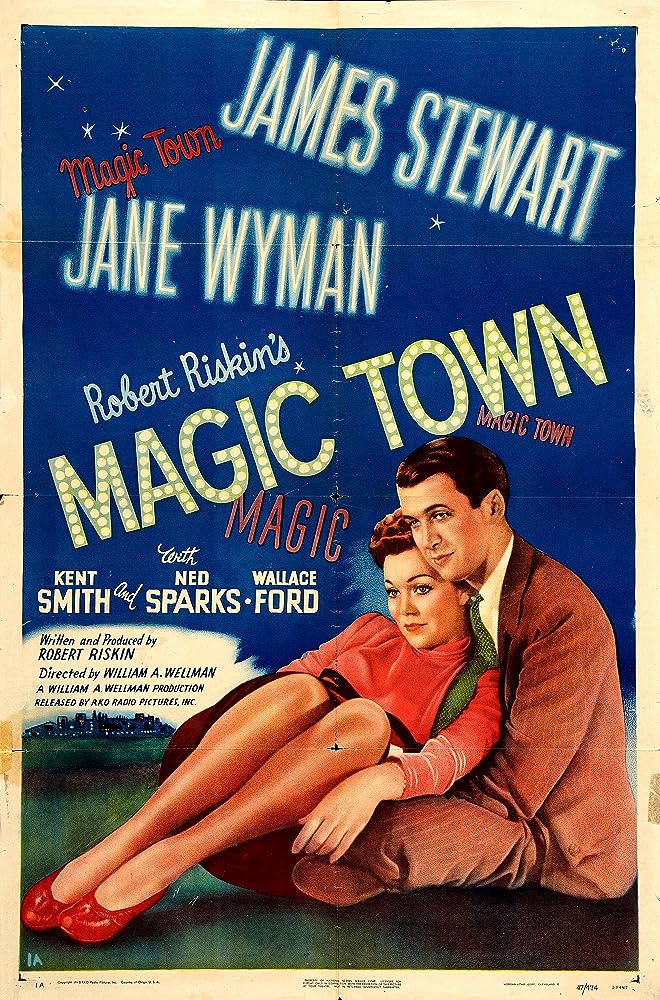