“The performers seem to be lifeless except for Milburn Stone.”

A muddled B-film about a successful lawyer with a tainted mind, whose plan to murder his unfaithful wife and her lover is far-fetched and ends up backfiring. The plot is pure film noir, but the film’s production values are even cheaper than the usual B-film noir. It is shot in a dull, shadowless manner and the performers seem to be lifeless except for Milburn Stone, who shines in a rare starring role for him.

The judge (Hale) opens his filing cabinet and pulls out the case about a brilliant but cynical and slimy defense lawyer, Martin Strang (Stone). In a voiceover the judge relates the sordid events of Strang’s life in flashback, telling how disappointed with life the lawyer became and why he planned for his own murder. Strang specialized in getting murderers free by unscrupulous means and tried to live above the law, always thinking of himself as a gambler. The judge says Strang’s not a criminal, but someone whose mind has been poisoned.

Strang, in the opening scene, is following his wife and watching her kiss her lover, the court psychiatrist, Dr. James Anderson (Waxman). At home after he makes a copy of the key to his wife Lucille’s (de Mille) secret love nest apartment, he asks her where she was last night and she lies. He receives a call from Lt. Edwards (Hamilton-later involved in the Superman series), about a murderer he freed has killed again and that the shrink is about to test him for his sanity to stand trial.

At Dr. Anderson’s office Strang is non-plussed that his obviously insane client (Budd) is declared legally sane to stand trial. Strang will distract Anderson and steal the shrink’s gun without him realizing that it is missing.

In the lobby of the court building Strang will give policeman Riley (Kirkpatrick) a $100 bill for the birth of his child and be told by the broke cop that he could use the money to get bonded (a license for the weapon). Later in the park, where Riley walks his beat, a strange series of events happen that allow Strang to put his diabolical plan into action to get back at his wife and her lover. An unlicensed street hustler is stopped by Riley and is about to be ticketed for a misdemeanor, but instead shoots and kills the cop. Strang tells the accused William Jackson (Guilfoyle) that he will take the case if, instead, of money as payment for his services, Jackson does him a favor after he is acquitted.

Strang gets Jackson off on the technicality that the cop wasn’t bonded, and when Jackson is released he takes him to the lovebird’s apartment and tricks Jackson into shooting him with Anderson’s gun.

Anderson is arrested and convicted of the murder; Lucille is left penniless as he cut her off from his will, giving all his money to the families of the victims his falsely exonerated clients killed. But his plan backfires when Jackson is retried for the cop murder and is convicted and, just before he is about to go to the electric chair, he confesses that he killed Strang. But it comes too late for Anderson, who committed suicide just a little earlier.

The plot was too convoluted to give the film credibility. But the film’s premise was still interesting enough for me keep watching. 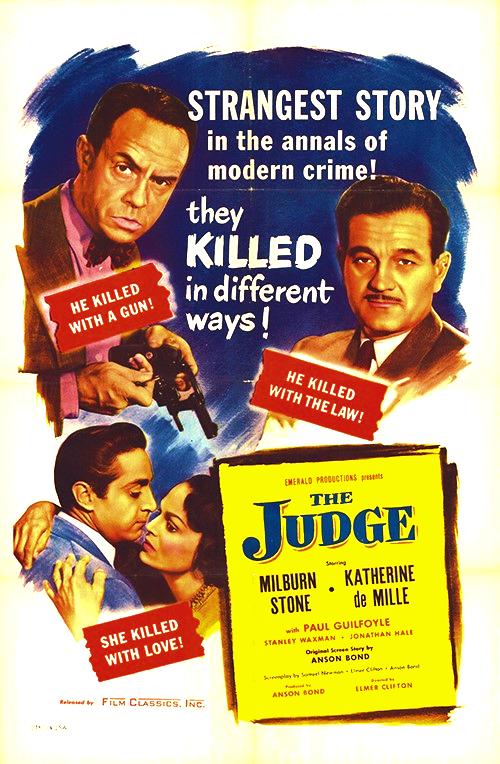