“A marvelous B film spy yarn.”

This first collaboration of director Michael Powell and writer Emeric Pressburger results in a marvelous B film spy yarn. Their collaboration lasted until the 1950s and resulted in such great films as Red Shoes and Black Narcissus. Its melodramatics are captivating and offbeat, in addition there’s an unusual romantic twist and it’s told from the villain’s point of view. It’s set in the Orkney Islands (on the northern coast of Scotland) during World War I, in 1917, and filmed in 1939, on the eve of World War II.

The German named Hardt (Conrad Veidt) is the captain of U Boat 29; he’s sent on an undercover mission to the Orkney Islands near the well-secured home base of the British battle fleet. Hardt contacts a German spy who is posing as the new school teacher, Anne Burnett (Valerie Hobson). The real Miss Burnett (June Duprez) was kidnapped by German agents and supposedly eliminated. Hardt receives orders from Burnett to sink 10 British battleships with his submarine, and finds out the information on how to do it is coming from a disgruntled British officer named Lieutenant Ashington (Sebastian Shaw). The disgraced Brit officer is seduced by the spy and paid handsomely by the Germans, and Hardt goes along with the plan even though he doesn’t like Ashington’s character and is jealous of him. Hardt has fallen in love with the spy, but finds she’s all business.

It concludes with all sorts of surprises, in a bitter-sweet ironical climax. Veidt’s performance as the enemy is nuanced, as he’s shown to be clever, very human and not the usual heavy-handed villainous one-dimensional Germanic one. The film carefully eschews propaganda for intrigue and a dark brooding atmospheric story, with many startling scenes that have influenced many other modern films. 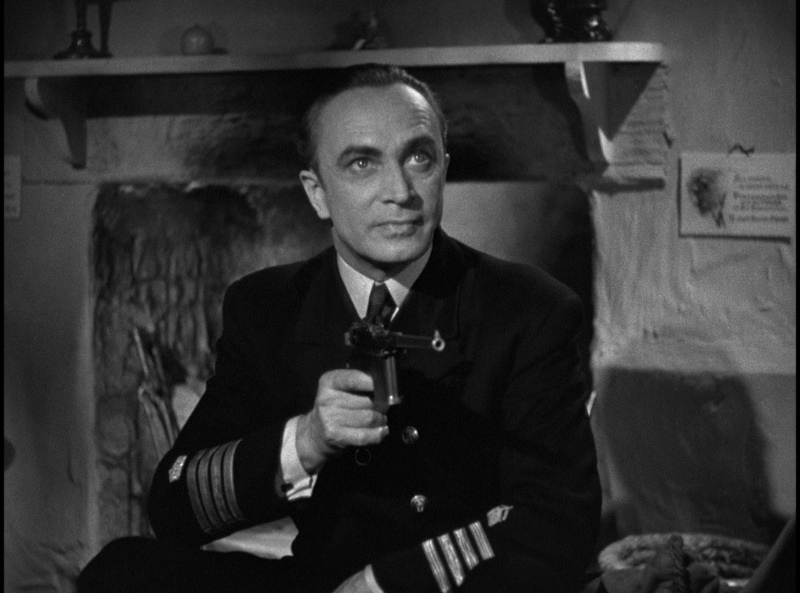