JOE’S SO MEAN TO JOSEPHINE

“It is not an easy movie to like because the relationship between the two opposites is painstakingly brutal.”

Written and directed by Peter Wellington, “Joe’s So Mean To Josephine” comes armed with a sharp-edged script and two bravo performances. One is from the 30-year-old, small time criminal, tough-guy Joe (Eric Thal). The other is from the nice, giggly, suburbanite, college-aged Josephine (Sarah Polley). This indie, by the first-time director, takes place in Toronto.

It is not an easy movie to like because the relationship between the two opposites is painstakingly brutal and progresses at a very slow speed, building to both their metamorphoses and an inevitable but not fulfilling conclusion. But there is a power in the raw dramatics unearthed due to the edgy performances.

There’s something to this character study that breaks through what seems like just an ordinary story and gives this film a puzzling breath of fresh air. It has something to say about relationships, and it says it in a way contemporaries can relate to.

Josephine is in a trendy downtown bar smoking and drinking and talking with her girlfriends when into the bar comes this handsome hunk, Joe, whom she is immediately attracted to. He is a man of mystery whom she takes for a drug dealer, as he meets a man with a suit and leaves the bar. The next morning she is surprised to meet him when he shows up to repair her mother’s telephone line. Joe turns out to be a surly loner,trapped in a life of petty crime. He also is emotionally unstable, exhibiting fits of violence. Josephine feels threatened by him and at the same time lusts for him. When she comes to his apartment for a date, she finds out that he is a wiretapper and that his only virtue seems to be that he does not lie about being a criminal. But, he does not tell her anything about himself. To keep him, she would have to put out for him that night. She is indecisive while nervously trying to make conversation and impress him with her coolness, both of which he is unresponsive to. But in the end, though she has doubts about him, she succumbs.

When Josephine tries to make this a normal relationship, one that she dreams about, Joe is too filled with hatred, both for himself as well as for others, to accommodate her. Joe especially doesn’t like her educated friends and feels smug that he stole a store’s worth of books and sold most of them to other book stores, but refuses to read the one’s he still has left in the apartment. She thinks it would be a good idea for him to try reading some of those books.

Meanwhile Josephine gets an apartment with a roommate, Mona (Waneta), and starts her university classes again after her college break and continues working on the student newspaper. Her life is starting to get exciting on its own merits and she is no longer thrilled about being treated like dirt by her surly boyfriend. She is maturing right before the viewer’s eyes.

But by this time something is also happening to Joe. He realizes that he loves her and can’t have her if he is always so violent around her. Joe comes over to her workplace, dressed-up for the first-time and wants to talk with her. The table is now turned and she stuns him by telling him she is too busy to see him, that they should remain friends but not see each other anymore. Joe doesn’t know what to do. His usual reaction of violence to such situations won’t work here. The dead-end life of his gnaws at him, as he realizes that he is someone without a future. She is the first good thing to come into his life and he doesn’t know how to reach her anymore, now that he can’t get to her just on the sexual attraction.

The most vexing line comes from the editor of the student paper Josephine is working at, David (Cadieux), who hears Josephine commiserating to him about her breakup and comments: “Guilt always makes you feel better about not feeling guilty.”

Joe has nothing to offer Josephine anymore, she has rather quickly grown out of that relationship. But Joe is now ready to tell who he is. But Josephine now just looks at him as a loser and is frightened, as he tries calling and making contact. He taps her phone and hears her talk derogatorily about him to her friends, telling them she only went with him for some momentary excitement.

The final scene is when Joe goes on a psychopathic rampage, as he holds her hostage in a house she went to as a secret retreat to get away from him. Joe pathetically tells her, in-between fits of throwing objects around the house, “That I was wishing it was like it was before–when you wanted to be with me.” Joe is almost begging her, while sitting like a baby on the floor: “Why can’t I be your boyfriend?”

There is no resolution forthcoming, one would only hope Joe will get some help for his severe emotional problems and his anti-social activity before it really becomes too late. He at least doesn’t physically hurt her. As for Josephine she is a bright girl with a rosy future, and Joe is not in that horizon.

There’s a lot this movie has to say about meeting the wrong person and this character-driven work makes the most of it, in this very engrossing, humorous, incisive, but, at times, very upsetting film. 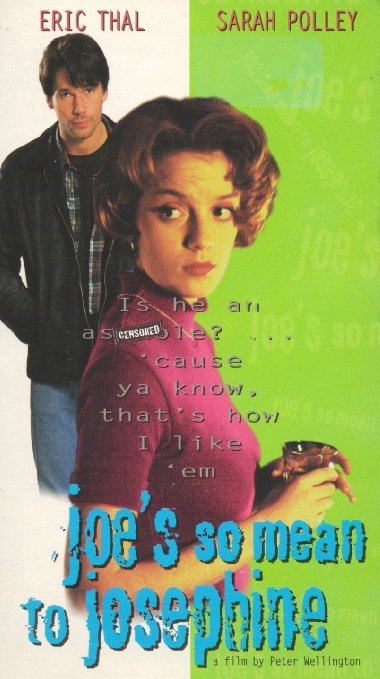