“It’s not as predictable as most Hollywood rom-coms. ”

German actress-turned-director Maria Schrader (“Love Life “/”Farewell to Europe”) helms this thought-provoking rom-com with a sci-fi twist. Schrader co-writes it with Jan Schomburg and they base it on a short story by Emma Braslavsky.

It tells the love story set in the near future between a woman research scientist named Alma (Maren Eggert) and a romance she agrees to have with a custom built “dream partner” humanoid robot given the name Tom (Dan Stevens, American actor), as she gets paid for doing the three-week experiment and the company in return gets her feedback.

The handsome Tom exists to satisfy all her wants, as he speaks a fluent German but with an English accent because he’s still being programmed.

Though trying hard to resist the charming Tom, Alma finds it not possible to just dismiss him because he’s so tuned into her needs. She calms herself from the weirdness of the relationship by saying she’s “just acting in a play.”

The film’s high concepts are left unanswered and ambiguous: such as questions about happiness, the value of conflict in relationships and what ultimately makes someone human.

But it’s not as predictable as most Hollywood rom-coms, thereby I found it irresistible when it went off on curious tangents. 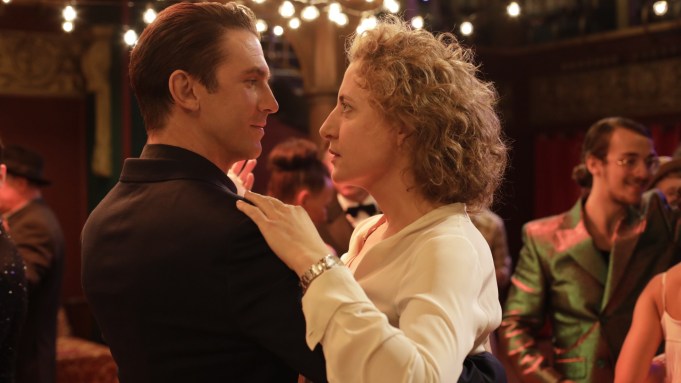