“A poor imitation of Lubitsch’s classic romance/comedy Trouble in Paradise.”

A poor imitation of Lubitsch’s classic romance/comedy Trouble in Paradise. Dieterle’s Jewel Robbery is adapted from a play by Ladislas Fodor. Even though it is outdated for modern audiences, it was seen as the height of fashion at its time as for style and dress. It was a witty Depression eye-pleaser for American audiences who liked to watch the rich in action, especially seeing them get robbed of their jewels. These were perceived as victimless crimes, since the jewels were insured.

Set in Vienna, William Powell plays the dapper jewel robber who bursts into an exclusive jewelry shop and robs the owner (Kohlmar) at gunpoint of his entire collection and also robs the customers. One of the customers is the bored, fun-loving Baroness Teri von Horhenfels (Kay Francis). Her wealthy husband, Baron Franz von Horhenfels (Henry Kolker), is in the store buying her a 28 carat diamond (The Excelsior Diamond).

Teri has just dumped her latest lover, the diplomat friend of her husband Paul (Hardie), and is looking for a new lover. She is charmed by the suave Powell who robs with class, is handsome, and is well-spoken. They flirt with each other during the robbery, which results in everyone getting locked in the safe except the foolish security guard Lenz (Charters). He’s suckered into taking the stolen boxes of jewelry out to Powell’s car and he smokes the marijuana cigarette Powell gives him, which makes him giggly.

The police have been under siege by a number of recent jewelry robberies and extend every effort to catch the thieves due to mounting public pressure. Powell, before he plans to retreat to Nice, enters Teri’s house and returns the diamond he stole from her. Powell then tempts Teri to run off with him. Teri digs the thrill of it but is too scared to give up the security of her rich lifestyle, even if she doesn’t love her husband and leads a dull life not caring about anyone but herself.

Powell’s gang enters her house again pretending they are the police and confiscate all the jewelry from the robbery which Powell planted in her safe. They take her to Powell’s luxurious suburban home, as Powell persuades her to run away with him. When the real police come to raid the gang’s hideaway Teri is mulling over Powell’s offer of being with him, but still can’t let go of her secure society ties. Powell ties her up so she won’t be thought of as part of the robbery and flees over the rooftops. As the film concludes Teri smugly talks into the camera, while telling her unsuspecting hubby who is with the cops that she plans to go to Nice after this terrible ordeal. 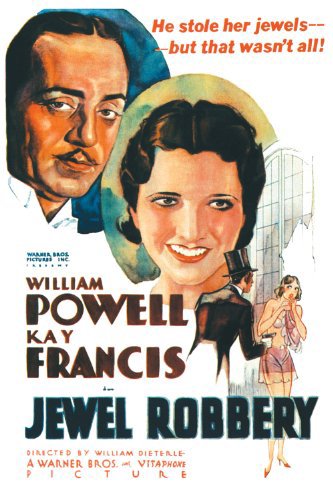