ALL THE PRESIDENT’S MEN

“A timely political drama for the Trump reign.”

A timely political drama for the Trump reign. Director Alan J. Pakula (“Sophie’s Choice”/”The Pelican Brief”) carefully reconstructs the White House link with the Watergate break-in by five burglars to the Democratic headquarters, in June, 1972, and the tie-in to President Nixon’s resignation in August 1974. It’s seen through the eyes of the Washington Post young reporters who broke the story, Carl Bernstein (Dustin Hoffman) and Bob Woodward (Robert Redford). It’s based on the book by Carl Bernstein and Bob Woodward, and is written by William Goldman. The well-acted and researched historical film feels like a detective thriller. Even if the results are known, it remains tense throughout.

The mysterious “Deep Throat,” Woodward’s shadowy informer, was played by Hal Holbrook. It wasn’t until 2005 that it was confirmed that the anonymous informant was the FBI agent Mark Felt. The publisher Ben Bradlee was admirably played by Jason Robards, who won an Oscar for best supporting actor. Martin Balsam and Jack Warden convincingly play concerned editors.

The production values, the acting and the intelligent screenplay are first-class. The film can be faulted for at times being dramatically obtuse. But the landmark film still ranks as one of the better American made political films. 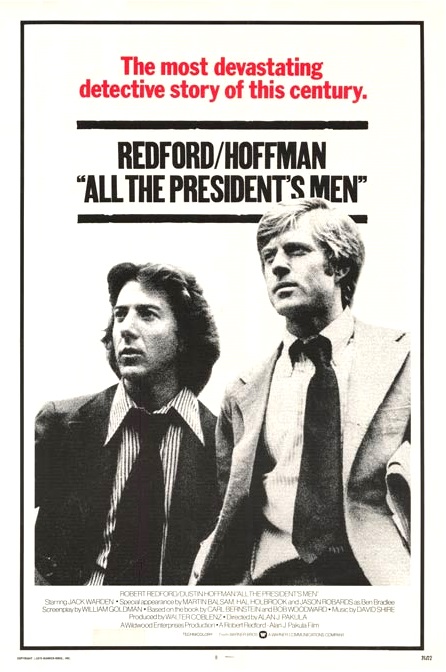