“Does a fine job in getting to the details of the baseball scandal.”

John Sayles (“Lianna”/”City of Hope”/”Men With Guns”) is writer-director of this gloomy period sports drama morality tale of the infamous fixing of the 1919 World Series between the Chicago White Sox and Cincinnati Reds, as gamblers, led by the notorious Arnold Rothstein (Michael Lerner), got to eight White Sox players to throw the Series. It became known as the Black Sox Scandal, and was exposed by sports writers Ring Lardner (John Sayles) and Studs Terkel (Hugh Fullerton). It led to the banning from baseball of the guilty parties and the appointing of the first baseball commissioner, Judge Kenesaw Mountain Landis (John Anderson), to clean-up the game for the public’s satisfaction. Sayles bases it on the 1983 best-seller by Eliot Asinof.

The film does a fine job in getting to the details of the baseball scandal and focusing on all the characters involved and why they did it, but it gets too bogged down in details and loses any emotional impact with too many characters having a say about the incident to tell one from the other. The pic tells how the players were motivated to dump the games because of their hatred for their loud-mouth penny-pinching owner Charles Comiskey (Clifton James). The most interesting ballplayer portrayed was aging ace pitcher Eddie Cicotte (David Strathairn), a family man who felt slighted by the owner refusing him a promised $10,000 bonus for a thirty win season after benching him for two weeks after he won 29 games so he wouldn’t get the bonus. A pissed Cicotte gets roped into joining the fix by disgruntled teammate Chick Gandil (Michael Rooker), and figures he could use the dough to send his daughters to college. The other player of interest was Buck Weaver (John Cusack), the third baseman who never received bribe money, hit over 300 for the series and maintained his innocence throughout the trial but was implicated in the fix with the others by the new baseball commissioner. Super-star ballplayer ‘Shoeless Joe’ Jackson (D.B. Sweeney), an illiterate, suffered the most from the lifetime ban by baseball. He’s recalled as the one a kid fan shouted out to “Say it ain’t so, Joe,” and is almost a forgotten baseball figure today though in his time he was compared to the great Babe Ruth and Ty Cobb. The other dishonest players from what might have been baseball’s greatest team ever included ‘Hap’ Felsch (Charlie Sheen), ‘Swede’ Risberg (Don Harvey), ‘Lefty’ Williams (James Read) and Fred Mcmullin (Perry Lang). It also features the honest teammates such as Eddie Collins (Bill Irwin), Ray Schalk (Gordon Clapp) and Dickie Kerr (Jace Alexander).

It’s an absorbing sports pic with fine performances by its ensemble cast despite its storytelling flaws, only it could have been much better if it was more focused and better edited. It serves as an allegory for America’s loss of innocence over baseball hero worship and how the uneducated poor class (the ballplayers) are taken advantage of by the rich and powerful (the ball-club owners and gamblers). 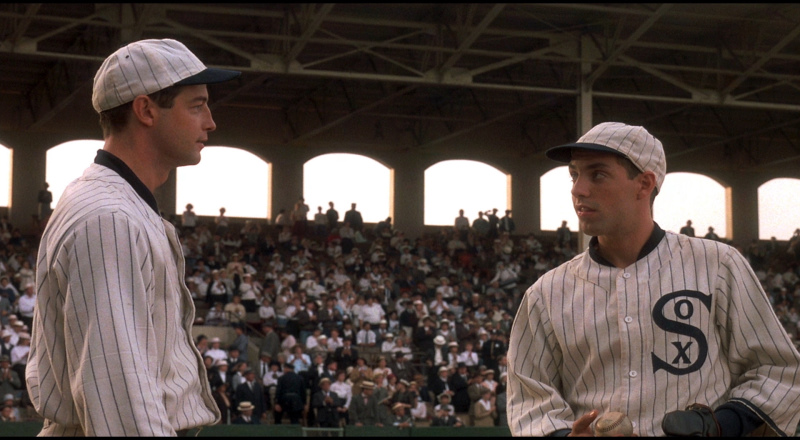